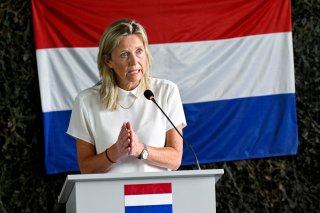 Dutch defense minister Kajsa Ollongren issued a formal apology on Monday to the families of victims of the Srebrenica Massacre, a notorious incident of ethnic cleansing in July 1995 in which more than 8,000 Bosniak Muslims were killed at the Srebrenica refugee camp by Bosnian Serb forces.

The Dutch minister’s apology, which occurred during commemorations of the twenty-seventh anniversary of the incident, marked the first time that Amsterdam had acknowledged culpability for the events. At the time of the massacre, a single Dutch army battalion protected the “safe area,” but offered little resistance when heavily armed Serb forces arrived and took control of the camp. Under the Bosnian Serb army’s control, the Bosniak men in the camp were separated from the women and children and subsequently massacred and buried in mass graves over the span of a week.

Ollongren, who attended a commemoration of the event during her visit to Bosnia, emphasized that “only one party is to blame for the horrific genocide: the Bosnian Serb army.”

“But let me be clear,” she added. “The international community failed to offer adequate protection to the people of Srebrenica, and as part of that community, the Dutch government shares responsibility for the situation in which that failure occurred. And for this, we offer our deepest apologies. … We cannot relieve you of this suffering. But what we can do is to look history straight in the eye.”

Although Ollongren’s remarks marked the first formal admission of guilt by the Dutch government, a Dutch court found in 2002 that the country was partially responsible for the massacre. That finding embarrassed the Dutch government and resulted in the resignation of then-Prime Minister Wim Kok, who acknowledged that the government bore partial responsibility but could not be blamed for the incident.

While many of the Bosnian Serbs responsible for the Srebrenica massacre, most notably Bosnian Serb president Radovan Karadzic and army commander Ratko Mladic, have been convicted of war crimes at the International Criminal Tribunal for the Former Yugoslavia (ICTY) in The Hague, relatives of the deceased have pushed the Dutch government to formally apologize for its responsibility and provide compensation to survivors.

The ICTY ruled in 2004 that the Srebrenica Massacre amounted to genocide—a finding harshly criticized by some right-wing Serbian groups and a small number of left-wing activists in the West, most notably including American social critic Noam Chomsky.