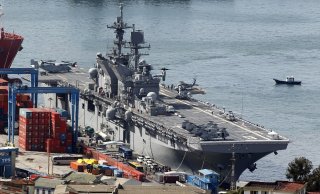 The Bougainville is slated to arrive in 2025. The America and Tripoli are referred to by the Navy as the America class’ Flight 0, while the Bougaiville is considered part of Flight I.

That means that the Bougainville will support F-35 operations and other aircraft in addition to its traditional ship-to-shore role that is enabled by the well deck. Navy developers sought to achieve this capability without increasing the size of the ship.

“Staying within the footprint that we have, we've had to relocate some spaces, tweak some spaces, but ensure we maintain that capability set from Flight 0,” McNeal said.

LHA-8 is built with other design features to include additional ICU-capable hospital beds, X-ray rooms, and an on-board surgical team. The ship is also receiving a Raytheon-built A/N SPY 6 v3 Enterprise Air Surveillance Radar to support air and cruise missile defense. This EASR radar is also fielded by the Gerald R. Ford-class carriers.

The Navy’s fourth America-class amphibious assault ship is also moving along with its development. An advanced planning contract is already in place with Huntington Ingalls Industries. The service plans to award its LHA-9 production contract in 2023. Similar to the Bougainville, LHA-9 will incorporate the Flight I well-deck configuration.