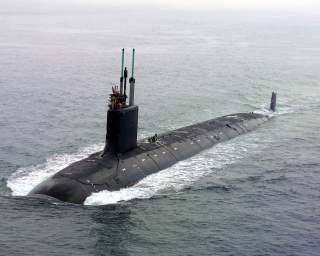 The boats, nine of which are now surging ahead through a new developmental deal between the Navy and General Dynamics Electric Boat, are reshaping submarine attack strategies and concepts of operations -- as rivals make gains challenging U.S. undersea dominance. Eight of the new 22-billion Block V deal are being engineered with a new 80-foot weapons section in the boat, enabling the submarine to increase its attack missile capacity from 12 to 40 on-board Tomahawks.

"Block V Virginias and Virginia Payload Module are a generational leap in submarine capability for the Navy," Program Executive Officer for Submarines Rear Adm. David Goggins, said in a Navy report. "These design changes will enable the fleet to maintain our nation's undersea dominance."

“Block V has some additional equipment we are developing, which will be added to the USS South Dakota,” Capt. Christopher Hanson, Program Manager, Virginia Class Submarines, said in April of 2019 at the Navy League’s Sea Air Space Symposium.

While many of the technical specifics regarding emerging attack submarines are naturally not available for security reasons, various new innovations will, according to Hanson last Spring, build upon cutting-edge systems now deployed on the most advanced attack submarine ever to deploy - the USS South Dakota. The South Dakota, which is now operational, began as a prototype, test-bed platform to evolve new technologies.What all of these USS South Dakota innovations amount to is that, Hanson said, they are informing current engineering regarding Block V as well as early conceptual discussions for a new Block VI submarine to begin in 2024. While many details are not available, generally speaking the USS South Dakota is engineered with additional engine-oriented quieting technology, advanced antennas for reconnaissance and less-detectable external “coating” for the submarine, Navy developers explain.

Looking at the multi-year trajectory of Virginia-class development; each Block has incorporated several impactful new technologies not yet present when the previous boats were built. For example, unlike Blocks I and II, Virginia-class Block III boats significantly increase firepower with the introduction of what’s called Virginia Payload Tubes adding new missile tubes able to fire 6 Tomahawks each. Block III also includes a new Large Aperture Bow “horseshoe-shaped” sonar, which switches from an “air-backed’ spherical sonar to a “water-backed” array, making it easier to maintain pressure, according to a 2014 report in “NavSource Online.”

Interestingly, this conceptual framework expanding to Blocks V, focused on engineering “upgradeable” platforms, was anticipated in the earliest days of the Virginia-class program more than 15 years ago. A 2005 Naval War College Review essay cites Virginia-class submarines as a platform benefiting from a modular, or “open architecture” approach. Since its inception, the Virginia-class was built with a mind to prepare for future upgrades, as evidenced in the essay.

One example referenced in the essay is a modernization effort called the Acoustic Rapid COTS Insertion (ARCI) program which, among other things, pushed “toward modularity for the Virginia-class, the SSGN (large Ohio-class submarines configured as guided missile submarines) and subsequent classes,” the essay states. The success of the ARCI program has continued for more than a decade since its beginning; the program’s success was cited in a 2015 DOT&E report. The DOT&E report recommended that the program begin to emphasize countermine missions, due to its track record of successful upgrades.

From a technical or engineering perspective, modularity means building a boat with a software and hardware foundation able to adjust as needed. For instance, while attack submarines currently fire Torpedoes and Tomahawks, it is entirely feasible, if not likely, that new submarine-launched weapons will exist 10 years from now.

The Naval War College Review essay, interestingly, aligns with the Navy’s strategic effort (emphasized by Hanson last Spring) about the need to engineer for future technologies to permit quick integration of new systems. The essay describes it as “yet-unenvisioned equipment to be installed to counter unimagined threats, and an insistence that core enabling characteristics such as stealth never be compromised.” (From”The Submarine as a Case Study in Transformation:Implications for Future Investment,” James H. Patton Jr, 2005)

The technical elements of undersea command and control, quite naturally, are also being engineered with a mind to an expected increased use of underwater drones. The Navy is now moving quickly with efforts to build an entire new fleet of UUVs able to destroy mines, conduct lower risk forward surveillance, deliver supplies or even fire weapons with a “human-in-the-loop.” Capt. Pete Small, the Program Manager for Unmanned Maritime Systems, addressed this phenomenon at Sea Air Space in April of 2019. He said the service’s now in development Orca XLUUV - Extra Large Unmanned Undersea Vehicle - is being configured to fire torpedoes.(The Orca program has progressed substantially since last April)