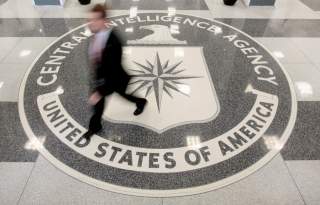 “We are the organization that produced the infamous Iraqi WMD estimate, but we also do nonfiction work,” Ambassador Robert Hutchins and former National Intelligence Council (NIC) chair said.

Hutchins and Greg Treverton, another former NIC chair, addressed the legacy of the infamous 2002 National Intelligence Estimate on WMDs in Iraq—and took swipes at the Trump administration—during the launch for their co-edited book Truth to Power: A History of the U.S. National Intelligence Council. Speaking at the Center for Strategic and International Studies, the two discussed the problems of intelligence and policy dating back to the Cold War that continue to haunt U.S. presidents today.

The book, printed by Oxford University Press, was co-authored by the eight NIC chairs from the end of the Cold War to the beginning of the Trump administration, including co-editors Hutchins (who served from February 2003 to January 2005) and Treverton (who served from September 2014 to October 2016).

As he traced the history of the intelligence community from the early Cold War intelligence agencies to the bureaucratic consolidation of the 1970s and the creation of the National Intelligence Council in 1979, Hutchins drove home the “deliberate and built-in tension between policy and intelligence.”

“[President Harry Truman] deliberately put that function not in the Pentagon, not in the Department of State, not in the NSA, which was just being created, but apart from all of those things, under the Director of Central Intelligence,” Hutchins said, referring to the “provision of strategic intelligence.” He continued: “that established the principle that intelligence analysis was to be one degree removed from policymaking.”

Treverton, however, was careful to emphasize that there is no such thing as “objective truth” in the intelligence community. He said that the only standard by which to assess intelligence is “was this analysis useful to policy?”

When asked to name a success of the NIC, Treverton brought up the end of the Cold War and the fall of the Soviet Union. “The intelligence community did get the details mostly right, as the economy, but nobody ever put them together in a story, that this is a country in crisis that may implode,” he said. “Imagine if you tried to tell that story in the Reagan administration. I imagine you’d find yourself observing submarines on Kamkatchka Island. That’d be your next job.”

However, when it came to NATO expansion after the Cold War, Treverton criticized the intelligence community’s refrain that “it’s a policy question, not an intelligence question.”

“Too little analytic work was done” by the intelligence community that could have predicted the negative Russian reaction to the second wave of NATO expansion, Hutchins added, claiming that adding the Baltic states were brought into NATO “too cavalierly.”

Naturally, the conversation drifted towards the presidency of Donald Trump, who had clashed numerous times with former Director of National Intelligence Dan Coats over the Trump administration’s conciliatory policies towards Russia and North Korea.

“Today we're in a slightly different position, where the intelligence community and the FBI are under some onslaught from some policymakers,” claimed panel host Seth Jones, Harold Brown Chair at the Center for Strategic and International Studies.

“The President of the United States simply does not want to have analysis of any kind, and not from the intelligence community, but not from anywhere else, either,” Hutchins said. He predicted that “the same factors that caused [Truman] to come to the realization that he needed a strategic intelligence analytic function” will also push future presidents into a “basic understanding that we need a strategic intelligence analytic function, and it needs to be built into the policymaking process.”

Discussing the problem of summarizing complex intelligence, Hutchins brought up the so-called “presidential summaries” of intelligence reports. Trump has reportedly refused to read the President’s Daily Brief, a fact that Hutchins made sure to allude to.

“If you’re writing for the very senior-most policy makers, you have to gauge your audience,” he said. “If it was a Bill Clinton or Barack Obama, you might expect that they would read a bit. If it was George W. Bush or the current incumbent, whose name I shall not mention, you really can’t get away with even a page. You have to find another vehicle for getting information in the hands of those who are making the decisions.”

Interestingly, Hutchins claimed that George Bush “who later criticized [the National Intelligence Estimate on WMDs in Iraq], had not read it, had not even read the one-page presidential summary.”

Hutchins, who took on the role of NIC chair six months after the report on weapons of mass destruction was issued, pointed out the faulty assumptions of his predecessors. But he also downplayed the role that the intelligence community played in initiating the unpopular war in Iraq.

Because the Iraq regime had used chemical weapons in the past, and “had never provided evidence of their destruction, ergo, they’re still there,” Hutchins said. “Everybody believed that.”

“Including us who opposed the war,” Treverton interrupted.

“That had very little to do with the decision to go to war,” Hutchins shot back. After arguing that “had they done what scientists do, applied the negative test strategy, trying to disprove a proposition,” the NIC would not have come to the same conclusions, said that the Bush administration was inching towards war regardless of the intelligence.

Treverton, who led the NIC under Obama, said that the intelligence community was “in the business of trying to restore credibility” for years after 2003. Nowadays, he asserted, “we’re well beyond that.”

But the legacy of the rush to invade Iraq still casts doubt on the credibility of U.S. claims about intelligence. In the Persian Gulf confrontation this summer, close U.S. allies and even previously hawkish voices in the U.S. press cast doubt on the Trump administration’s claims about Iranian activities.

In response to a question from the National Interest about what the intelligence community can do to push back against doubts, Hutchins said that “it has to be done through the framework of government and confidentially, in order to have a chance at being taken seriously. And that's up to political leaders.”

“As reports come out that cast aspersions on the intelligence community, it's up to them to really stand up and defend them. The president I worked for at the NSC, the first President Bush, did that all the time,” he continued. “This is one of the reasons telling the truth to power has to be done behind closed doors, and in a manner that is helpful and useful, not just a stab at them after the fact.

That was one of the problems with the Iraq WMD estimate. The warnings weren't heeded beforehand, and when the estimate leaked after the invasion went badly wrong, the policy community didn't react well to that,” he concluded. “They tended to blame and to criticize intelligence, when they didn't actually heed intelligence before the fact.”