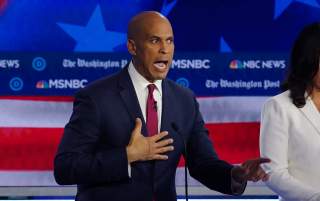 The ad comes as Booker’s campaign works to raise his lagging poll numbers as the presidential election cycle continues. The New Jersey Democrat’s team has committed itself to ramping up a persuasion campaign designed to reinvigorate interest in the senator.

“I’m here because of love, a heroic love that pushed people to march, knowing they could be beaten,” Booker said in the digital ad as images of 1960s era protests flashed across the screen. “The truth of America is that we win when we come together and show the best of who we are.”

He added: “That how we’ve beaten demagogues and bigots before, and that’s how we’ll beat Donald Trump.” Booker’s ad displays images of white supremacists marching with tiki torches before showing a black and white photo of Trump dismissively waving to reporters.

Trump denounced all forms of racism in an August 2018 tweet that specifically mentioned the Charlottesville, Virginia, riots that occurred in 2017. The tweet came before a “Unite the Right” rally.

He garnered 2% support in a Quinnipiac poll conducted between Nov. 21 and 25. Booker’s polling numbers are similar to those of other third-tier candidates, such as Democratic Sens. Amy Klobuchar of Minnesota and Kamala Harris of California, both of whom are mired in single digits.

Trump is seeing a modest improvement in his approval numbers since House Democrats kickstarted an impeachment inquiry. His approval rating climbed to 48% compared to a 47% disapproval, while support for impeachment plummeted from 48% to 43%, according to a November poll Emerson published.