Is a New Cold War Brewing in the Balkans? 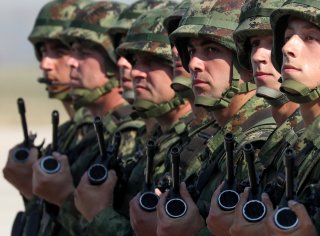 The Russian embassy in Bosnia and Herzegovina recently warned it will “react” if Bosnia takes further steps towards joining NATO, saying it will perceive such an act as hostile. Then, a few days later, Igor Kalabukhov, Russia’s newly-appointed ambassador in Sarajevo, compared NATO to a hostile enemy in an interview and warned that “We must take this fact into consideration – the encroachment of NATO’s infrastructure towards our borders. We must react in a military-technical sense.”

Such warnings, stark as they may be, are not unprecedented.

Moscow clearly believes that the purpose of NATO is to “fight against Russia” and that joining NATO will force Sarajevo to take a side in the “military-political confrontation.” Despite Bosnia being small and war-torn, such a vividly antagonistic posture from Russia clearly shows that the Balkan region as a whole plays an outsized role in wider geopolitical constellations. Namely—Bosnia, Kosovo, and Serbia are the only three remaining Balkan countries that have not yet joined NATO. Serbia is adamant on staying out of the alliance, while Kosovo is yet to fulfill a number of pre-conditions. However, being home to Camp Bondsteel—the biggest U.S. military base in the region—and staunchly pro-American in its foreign policy leaves no doubt as to Kosovo’s geopolitical orientation. Hence, that essentially leaves Bosnia as the only remaining country that wants to join NATO (or at least that is what half of its population wants). Namely, Bosniak Muslims and Croats are, according to opinion polls, pro-NATO oriented while Bosnian Serbs gravitate towards Russia. According to a 2017 International Republican Institute opinion poll carried out in the country, Bosniak Muslims are most eager to join the alliance: 57 percent of Bosniaks strongly support NATO accession, compared to 53 percent of Bosnian-Croats and just 2 percent of Bosnian-Serbs. The logic behind such reasoning is rather straightforward: NATO, led by the United States, intervened twice to save a persecuted Muslim population from the onslaught of a Christian enemy—in Bosnia (1994, 1995) and in Kosovo (1999). Hence the love for NATO. On the other hand, Bosnian Serbs, by means of their shared Orthodox Christian faith and pan-Slavic ties, look towards Moscow.

Russia has for years maintained its opposition to Bosnia joining NATO, though it opted to call for “military neutrality” instead of outright opposition. With Joe Biden, a long-time sympathizer of Bosnia and Kosovo, now in the White House, Moscow is taking a more hostile stance.

For years, a number of Balkan observers (including myself) have been warning of increased Russian malign influence in Bosnia and in the wider Balkan region, particularly after the discovery of Bosnian Serb paramilitaries acting beneath the radar and allegedly linked to Russian biker gangs known as the “Night Wolves.” The “Wolves” have been under U.S. sanctions for years due to their active involvement in the Russian annexation of Crimea and in recruiting pro-Russian separatist fighters to fight in Ukraine. Elsewhere in the region, there was a botched coup d’état engineered by fourteen people (including two Russian military intelligence officers) aiming to install a pro-Russia, anti-NATO government in Montenegro in 2016; Attempts to sow discord in North Macedonia prior to its own NATO accession in 2017—again, blamed on pro-Russian elements—and attempted sabotage of Macedonia’s name change deal with Greece in 2018 (which paved the way for the country to join NATO).

To be clear about one thing—Russia does not view tiny Western Balkan states as a national security threat. However, so far as Moscow is concerned, forestalling their accession to the Western military alliance is a strategic goal within Russia’s broader foreign policy objective of curbing NATO’s expansion. There is also the tit-for-tat moment: since NATO has been infringing upon Soviet-era zones of influence in its soft underbelly (i.e., Georgia and Ukraine), Moscow feels entitled to adequately reciprocate in NATO’s (and the European Union’s) backyard. Russia has been probing and testing the West’s response. The same strategy has been applied in Ukraine’s Donbas, Nagorno-Karabakh, South Ossetia, and Abkhazia, and in Moldova through Transdniestria. By developing the ability to sway over local powerbrokers and play with fire in frozen-conflicts, Moscow can essentially blackmail NATO and the EU and extract concessions from them. Hence, Moscow is using the Balkans as a bargaining chip.

Bosnia is the easiest target as existing deep-rooted problems can be exacerbated to divert the EU’s and NATO’s attention from Moscow’s more ambitious designs. A key Russian ally in Bosnia is the hardline politician Milorad Dodik, currently the Serb-member of the tripartite Presidency of Bosnia and Herzegovina. Not only has he met Russian president Vladimir Putin nearly ten times over the past years, but he has defied almost all Bosnian state institutions and has shown that his party can paralyze Bosnia’s politics—at will. Though not very much liked in the West, Moscow’s rhetorical support is of paramount importance to him. When he ruled over the Bosnian Serb entity (comprising 49 percent of Bosnia) he forged closer relations and received weapons and military advisors from neighboring Serbia and Russia. He is vehemently anti-NATO and staunchly pro-Russian. Moscow knows that rhetoric alone suffices to keep Bosnian Serbs happy, and they can in turn—at Moscow’s request—paralyze Bosnia’s ability to function. If Russia can achieve so much leverage over an EU and NATO-aspiring country with hardly any costly investments, so much the better.

Bosnia’s postwar political system is fiendishly complex and bureaucratic. The country remains starkly divided among Catholic Croats, Muslims Bosniaks, and Orthodox Christian Serbs. Each ethnic group has a president, and every eight months they take turns in running the country. Administratively, Bosnia and Herzegovina is divided into two political entities: one inhabited by Bosnian Serbs (Republic of Srpska), the other shared by Bosniak Muslims and Bosnian Croats (Federation). The Federation is further divided into ten Swiss-style cantons. When not dysfunctional on its own, such a convoluted political composition, relying mostly on consensus in decisionmaking, makes it ideally suited for malign foreign interference.

Russia has for years been waging a systematic assault on Western democracies—either by meddling in U.S. elections, promoting the rise of the far-right in Europe, or advocating BREXIT—which plays into the Kremlin’s ultimate goal of having a weaker European Union. The Kremlin has also done heaps to undermine the post-World War II rules-based international order which seeks to protect smaller states from the predation of larger ones. The Western Balkans have emerged as a new front in this no longer covert war. Russia’s strategic objective in the Western Balkans is not only to block aspiring nations from joining NATO but to stymie the development of pro-Western liberal democracies. Its media outlets disseminate pro-Kremlin narratives in Serbia and among Bosnian Serbs by promoting shared Slavic and Orthodox ties, reinforcing the idea of Russia being the only true ally of Balkan Orthodox Christians, lionizing Vladimir Putin, and memorializing NATO’s bombing of Serbia. Russia is striving to keep public opinion stridently against the alliance.

This brewing conflict has the potential to develop into a more serious confrontation between the United States and Russia, and essentially between Biden and Putin. The Balkans remain unfinished business, left behind from the 1990s and an untimely American pull-out, which is coming back to haunt Washington. Hence, the prospect of Western integration for the region still remains the main vehicle towards achieving sustainable peace and stability. It is a process that will not only require constant commitment and periodical encouraging signals but active involvement of the United States.

Geopolitics has returned to the Balkans and the region has once again become a chessboard in a new “Great Game” where Ankara, Brussels, Washington, Moscow, Berlin—and, increasingly, Beijing—vie for influence and geopolitical leverage in the pursuit of wider aspirations.