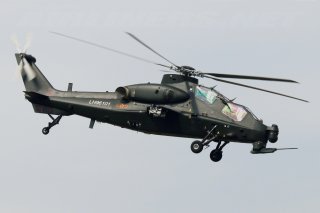 A Chinese government-backed newspaper has reported new details of an upgraded People’s Liberation Army attack helicopter called the Z-10. The helicopter is described as a tank and ship killer capable of land and maritime attacks.

The Z-10 appears to be a deliberate blend between the U.S. Army’s famous Apache attack helicopter and several somewhat stealthy attack/reconnaissance helicopters. The Army has several such designs in development as part of the Future Vertical Lift program.

The Global Times quotes a Z-10 pilot describing that the helicopter can be specifically configured for different missions.

Missiles can be used against armored vehicles and tanks, while rockets the gun will be used against infantry, according to a Z-10 pilot interviewed by China Central Television, the paper reported. The Z-10 will usually carry eight air-to-ground missiles and two multiple rocket launchers when attacking enemy tank groups. The missile is reported to have an accuracy rate of 85 percent; each Z-10 sortie can destroy six or more enemy tanks.

With a range of 1,120 kilometers, the Z-10 has an empty weight of about 5,100 kilograms. It has four external hardpoints that can carry air-to-ground and air-to-air missiles as well as rockets. The Z-10 also fires the fifty-kilogram-class TY–-90 air-to-air weapons.

“A standard group of four Z-10s can carry 32 anti-tank missiles, eight 57 millimeter caliber multiple rocket launchers and four guns, and this is enough to wipe out three tank companies,” according to Global Times.

The helicopter’s lethality is increased by an F-35-like pilot helmet visor which responds to or mirrors eye movements to zero in on targets. The weapons will point to wherever the pilot is looking through the helmet.

It is not clear if the Z-10 helmet is comparable to the F-35’s, yet an ability to have targeting closely aligned with eye movement does seem to present a new threat.

The helicopter bears some resemblance to the stealthy Invictus helicopter being developed by Bell. The Global Times also describes the Z-10 as boasting some characteristics to make it harder to target, such as upward-facing exhaust vents to reduce the helicopter’s infrared signal.