A New Era for Iran’s Ambitions in the Western Hemisphere 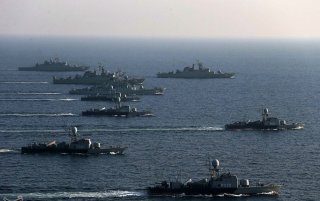 Two Iranian warships recently steamed around the southern tip of Africa into the Atlantic, most likely en route to Venezuela. The story is one that has largely been ignored by both the media and the White House, which has minimized the impending maritime lash-up by opining that “buying armament [from Iran] won’t put food on the table for Venezuelans.” Yet the expeditionary voyage represents an important strategic development, both for what it tells us about Iran’s burgeoning blue-water naval capabilities and because it reflects Tehran’s enduring focus on securing a strategic military foothold in the Western Hemisphere.

To understand the broader context, it’s necessary to appreciate the Islamic Republic’s strategic outlook. Geopolitically, Iran’s radical regime has long seen itself as the “center of the universe,” a regional hegemon around which Middle Eastern politics by necessity need to revolve. Increasingly, however, Iran’s ayatollahs are thinking bigger, and over the past decade (and especially since the signing of the 2015 nuclear deal with the West) have begun to see their country as a global player.

The sine qua non of being a global power, however, is being able to project power globally, which is why the Iranian regime has for years sought to erect a blue water naval capability. It is also why Iranian officials have repeatedly intoned their commitment to establishing a naval presence in the Atlantic—and why they have taken concrete steps to do so.

Back in 2015, the Iranian regime formally dispatched two warships to the Atlantic for the first time. The move was intended to send a clear geopolitical message to Tehran’s adversaries. “Iran’s military fleet is approaching the United States’ maritime borders, and this move has a message,” announced Admiral Afshin Rezayee Haddad, then the commander of Iran’s Northern Navy fleet.

Ever since that maiden outing, the Iranian regime has periodically returned to the question of blue water naval capabilities, and of fielding a sustained naval presence far from its shores. While the country’s feared clerical army, the Islamic Revolutionary Guard Corps (IRGC) is primarily tasked with coastal defense and Persian Gulf operations, the Islamic Republic of Iran Navy (IRIN) has emerged as the regime’s top means to project maritime power. In its 2019 report to Congress on Iranian military power, the Pentagon noted that “one of the IRIN’s key missions is to conduct out-of-area operations and naval diplomacy in the region and beyond,” and highlighted its “longer term ambitions to function as a true blue-water navy.”

Those ambitions now appear to be taking a major step forward, and the logical destination for Iran’s burgeoning expeditionary navy is its most sympathetic partner in the Western Hemisphere.

Military ties between Iran and Venezuela have flourished since 2005, when then-Iranian president Mahmoud Ahmadinejad and Venezuelan strongman Hugo Chávez forged a vital partnership centered around defense cooperation. That partnership provided the Iranian regime—then struggling under the weight of widening Western sanctions—with an important avenue by which to circumvent sanctions and continue to build up its military arsenal, including its missile program and Naval assets. It also gave Tehran an important gateway to broaden its contacts with other regional anti-American regimes, including Cuba and Bolivia.

Nearly two decades on, those ties have proven enduring. Despite Chavez’s death in 2013, Venezuela remains a key Iranian ally—and a top partner in Tehran’s efforts to project power in the Western Hemisphere.

Since May of 2020, the Iranian regime has been providing the Maduro regime with critical supplies, through multiple shipments of fuel and food. But Iran’s assistance wasn’t simply altruistic; the IRGC simultaneously began using commercial gasoline transfers to Venezuela as a cover for establishing a logistical maritime corridor to the Western Hemisphere. More than the commercial transfer of fuel, the IRGC-affiliated oil tankers were testing Caribbean waters to find precise routes, ports, and limits for a future Iranian naval presence.

The future has arrived, and military cooperation between the two countries is on the rise. Following the October 2020 expiration of the UN-mandated arms embargo on Iran, Tehran has become a major player in Maduro’s efforts to set up a military scientific-technical commission to modernize the Venezuelan armed forces—something that is liable to lead to arms transfers between the two countries in the near future.

For the Biden administration, these developments hold at least two concrete takeaways.

The first is that Iran’s military capabilities are growing apace, despite the regime’s economic dire straits. The past two years have seen Iran’s economy significantly impacted by pressure from the United States, which has destabilized the Iranian economy and helped fuel domestic grassroots protests against the regime in Tehran. The Islamic Republic’s investments in military capabilities, however, do not appear to have wavered as a result. And now, they are poised to become even more substantial, in light of the sanctions relief the regime is likely to receive as a result of renewed negotiations with the United States.

The second is that the Iranian regime is building an active operational military presence in the Western Hemisphere. In the past, analysts and officials have tended to dismiss Iran’s involvement in Latin America as being in decline, or merely a function of the Ahmadinejad/Chávez era. Increasingly, however, it is clear that the Islamic Republic maintains an enduring strategic interest in growing a military footprint south of the U.S. border—and that sympathetic regimes in the region are allowing it to establish one.

These trends, moreover, are increasingly becoming Washington’s problem. Iran’s warships are currently on track to reach Venezuela in early July. If and when they do, it will represent a major milestone for the Iranian regime’s blue-water ambitions, and a potential new era for Iran’s presence in Latin America. In turn, how Washington chooses to respond will go a long way toward signaling to Iran’s leaders, and their Latin American counterparts, whether the United States is serious about countering the intrusion of one of the world’s most dangerous regimes into the Western Hemisphere.

Ilan Berman is Senior Vice President of the American Foreign Policy Council in Washington, DC. Joseph Humire is the Executive Director of the Center for Secure Free Society, also in Washington. They are the co-editors of Iran’s Strategic Penetration of Latin America (Lexington Books, 2014).