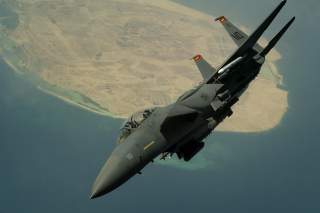 While this “poor man’s F-35” may serve a niche of being more capable than 4th generation fighters but not quite as stealthy, the Pentagon should be wary of swooning at the courting rituals that captured its heart (and wallet) with the F-35. Very specific targets on timelines, costs, and performance should be outlined in the contracts with penalties for unmet benchmarks.

Necessity is the mother of invention. Such a truism applies to many areas, including warfare. The battlespace is ever-shifting. Unmanned Aerial Vehicles (UAVs) evolution from novelty to ubiquitous tool over the past twenty years stemmed from the realization that it was not cost-effective to use manned fighter aircraft with limited loiter capability to engage multiple small targets over large swaths of Afghanistan or Iraq.

The same shift seems to be occurring within the Pentagon now with the release of the Trump Administration’s 2020 budget requesting an increase in funding for the F-15X fighter jet. Proponents of the F-35 fighter worry that any new F-15X procurement will create a future competition for resources with the previously requested F-35s. Unfortunately, this is bound to spark an unnecessary political battle, as the Air Force is currently committed to purchasing both aircraft.

As a former staffer at the Department of Defense who dealt with procurement issues, I understand the need for some diversity when equipping our armed forces for differing threats. There has always been a tug of war between providing what the Pentagon requests versus what Congress says it needs, mostly because of politics. Armaments production is notoriously peppered throughout many legislative districts so as to exert maximum pressure on fund authorizers and appropriators, many times at the expense of the advice of strategists and operators. That said, while it is difficult to call a $750B defense budget a “resource-constrained environment” with a straight face, such expense falls in line with the current national security strategy (NSS), regardless of how one might feel about its efficacy.

There is an old axiom that states that a camel is a horse designed by committee. I have seen firsthand some of the challenges with the F-35 program with respect to cost, readiness, and capability, and therefore diversification seems prudent. This is not to say that the F-35 should be abandoned, it shouldn’t. But conceptual superiority takes a back seat to immediate real-world utility, and you want to avoid procuring something that will be obsolete by the time it is fielded. Advocates for the F-35 are worried that in future years they will be squeezed by budgetary issues that will pit contracts for F-35s against upgrading the current F-15 fleet with F-15X fighters. Perhaps they should be focused on getting the current F-35s performing as advertised before worrying about future sales.

The F-15X, a new platform drawing heavily from the traditional (and familiar) F-15, theoretically would be more marketable to the international community given the presumably lower threshold with respect to tech release issues and lower cost per flight hour (CPFH). These are two of the biggest issues when attempting to integrate a platform into the U.S. national security strategy while simultaneously trying to lessen the burden of development/integration on the Pentagon by cost sharing with international customers. In fact, Saudi Arabia’s previous purchase of F-15s provides a robust follow-on potential for future upgrades and sales. Israel and Japan also fly the F-15, two partners in volatile regions that would benefit from continued service of the platform in the areas of interoperability, acquisition and cross-servicing capabilities, and of course, the potential for future upgrades and sales.

From an order-of-battle perspective, every military commander would love to have unlimited superior platforms to achieve their objectives with a zero-casualty rate, but that isn’t reality. There are older 4th generation fighters that can perform most of the tasks needed to subdue a conventional adversary, but the complementary approach works best. If the 5th generation F-35s are stealthy and highly survivable but limited in payload and availability, it makes sense to use them as the tip of the spear to knock out the enemy’s most lethal and robust defenses, leaving the bulk of the work to platforms that have years of proven ability and are already accustomed to traditional missions.

The F-15X touts itself as a wholly upgraded version of a reliable, versatile, and familiar platform. What that means to the war-fighter is that “maintenance facilities, hangars and supply chains would not need to be changed, and pilots would only need brief training with new electronics systems; these conversions could take place immediately and without loss of readiness,” says George Landrith of Frontiers of Freedom, an educational foundation promoting strong defense.

While this “poor man’s F-35” may serve a niche of being more capable than 4th generation fighters but not quite as stealthy, the Pentagon should be wary of swooning at the courting rituals that captured its heart (and wallet) with the F-35. Very specific targets on timelines, costs, and performance should be outlined in the contracts with penalties for unmet benchmarks. Our government needs to be reminded that they are stewards of the American people’s money. Every cost-overrun, missed deadline, and unforeseen spec change that unnecessarily bleeds the treasury and lets industry off the hook is not only an affront to the taxpayer, but jeopardizes the safety of our men and women in uniform. That, in the end, is who they are working for.

Greg Archetto was a foreign affairs officer at the Bureau of Political Military Affairs at the U.S. Department of State and a security assistance officer at the Defense Security Cooperation Agency, Office of Secretary of Defense. He was also foreign policy advisor to Sen. Rand Paul (R-Ky.). He has a BA in Political Science from Rowan University, MA in Public Policy from Rutgers University, and an MA in National Security/Strategic Studies from the U.S. Naval War College.