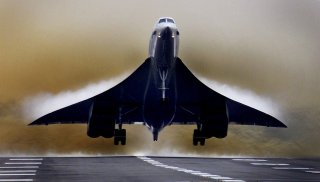 Though initially proposed as a super-fast civilian airliner, the jet’s flight characteristics have an obvious military advantage.

A new and exciting airplane—a supersonic, four-engine jet with a uniquely-shaped fuselage—may soon be offered to the United States military as part of a joint venture between Northrop Grumman and Boom Supersonic.

Prototypes of the aircraft do not exist—as of now, the plane is a drawing-board-only design. However, a press release from Northrop Grumman explained that “the agreement to together propose special mission variants of Boom’s Overture supersonic aircraft was finalized at the Farnborough International Air Show.”

The statement added that the Overture aircraft is “designed to carry up to 80 passengers at twice the speed of today’s airliners,” but that a “special mission variant of Overture has the potential to support government and military missions that require rapid response.”

“Time is a strategic advantage in high-consequence scenarios, from military operations to disaster response,” said Blake Scholl, Founder and Chief Executive Officer of Boom Supersonic, in the press release.

“This collaboration between Boom and Northrop Grumman unlocks Overture’s unmatched high-speed mission capability for the United States and its allies.”

Depending on mission and application, the Overture supersonic jet could serve as a high-speed cargo jet or excel at swift medical evacuation. In a surveillance role, the jet could also serve as a quick eye-in-the sky to watch large swaths of land or sea. Finally, given the jet’s agility, it could also excel as a command-and-control jet “in a variety of scenarios.”

If Boom Supersonics’ jet is realized, the company anticipates a Mach 1.7 cruise speed over water and Mach .94 over land—about double the speed of most commercial airliners. Like the Franco-English Concorde—the last supersonic commercial aircraft—the Overture would be forced to slow when flying over land, eliminating its sonic boom over urban areas.

Though the Concorde was the world’s fastest commercial jet, its loud sonic boom—and by its high ticket pricing prevented broader commercial appeal and catered almost exclusively to the very wealthy. It is unclear what the Overture’s ticket pricing scheme would look like.

“Together we can ensure our military customers have variants of Overture for missions where advanced system capabilities and speed are critical.”

Northrop Grumman and Boom Supersonic anticipate a 2024 production date, followed by flight testing in 2026 and certification for ferrying passengers in 2029.