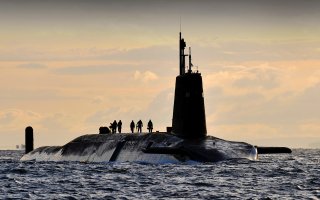 When HMS Dreadnought entered service with the Royal Navy in 1906, she was the most revolutionary warship of her era. She was the first battleship to feature a uniform main battery. She was also the first capital ship to be powered by steam turbines, making her the fastest capital ship in the world at the time of her completion.

The Royal Navy has now begun construction of a new vessel named Dreadnought more than a century later. It will be the lead boat of a class of ballistic missile submarines meant to replace the Vanguard class. A total of four subs have been ordered, and the first two are now under construction as part of the "Dreadnought Alliance," a partnership involving BAE Systems, Rolls-Royce, and the Submarine Delivery Agency.

The future Dreadnought and her sister boats promise to be the most powerful and advanced ballistic missile submarines when they enter service in the early 2030s. The four boats, which will be named Dreadnought, Valiant, Warspite and King George VI, will be armed with Trident D5 missiles and take on the duties of the “Continuous At Sea Deterrent.” A ballistic missile submarine has been on patrol every day since 1969.

As previously reported, the class is expected to be 150 meters long—nearly 500 feet—and displace 17,200 tons, making the Dreadnoughts the largest submarines ever built for the Royal Navy. The submarines will also feature a new lighting system that can simulate night and day, giving underwater mariners a better sense of what time it is, another first for the Royal Navy.

The new class will be slightly larger than the Vanguard boats and incorporate a number of new stealth features. As NavalNews.com reported, the emphasis on stealth is already visible in the external appearance of the boats. Since the 1980s, submarines have been fitted with noise-reducing "anechoic tiles," while the current Astute-class utilizes an anechoic coating. This has resulted in a better covering of the submarine's hull, and reportedly provides a more optimal performance when compared to adding the tiles after the hull has been completed.

The Dreadnought class will also utilize a much quieter propulsion system by incorporating a new turbo-electric drive, which uses the nuclear reactor to generate electricity and powers the motor that drives the propulsor. By driving the propeller shaft directly, this should result in a far quieter submarine.

Contributing to the UK Economy

According to the Dreadnought Alliance, the Dreadnought submarine program will provide a significant contribution to the UK economy, supporting almost 30,000 jobs across the country. Approximately 10,000 people work on the Dreadnought and Astute submarine programs at the Company’s Barrow site. Recruitment continues with experienced hires, apprentices, and graduates needed for a wide range of roles including manufacturing, engineering, operations, and project management.

While nearly half of those direct jobs will be in the North West of England, the supply chain for Dreadnought extends to every region of the UK. BAE Systems estimates it will spend about £7.5 billion with 1,500 supply chain companies over the life of the program across England, Scotland, Wales, and Northern Ireland.

The Significance of the Name

The name of the lead vessel has been seen as significant since it was announced five years ago. As the British Ministry of Defence has noted, Dreadnought is one of the famous names in the Royal Navy.

"Named fifty six years after the launch of Britain's first nuclear-powered submarine of the same name, Dreadnought has extensive historical significance, borne by no fewer than nine Royal Navy ships,” a Ministry of Defense press release said in 2016. “A previous Dreadnought sailed with Sir Francis Drake to repel the Spanish Armada; another was present with Nelson at Trafalgar, where her gunnery was acknowledged to be the most devastating of any ship present. But the most famous of all was the ninth Dreadnought – a battleship so advanced that it rendered all others obsolete at a stroke."

No doubt the UK hopes to highlight that while the Royal Navy may no longer rule the waves, the service does boast the most advanced warship of her class once again.