New Jersey: The Navy's Best Battleship of All Time? 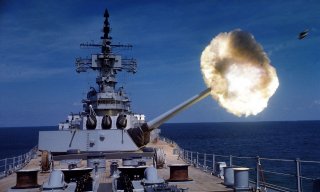 Known as the "Big J" or "Black Dragon," USS New Jersey (BB-61) has the distinction of being one of the most decorated battleships to have served in the U.S. Navy, while she was also among the largest warships ever built.

The second of the Iowa-class, which were the final battleships to enter service with the United States Navy, she was designed as a "fast battleship" that could travel with a carrier force and take the fight to the Japanese during World War II. She was also the only U.S. battleship to provide gunfire support during the Vietnam War.

Launched on December 7, 1942 – a year after the Japanese sneak attack on Pearl Harbor – the New Jersey was commissioned in May 1943 and began her career as the flagship of the 5th Fleet under Adm. Raymond A. Spruance.

The battlewagon took part in Operation Hailstone, the two-day surface and air strike by her task force against the major Japanese fleet base on Truk in the Caroline Islands. Later the battleship served as the flagship of the 3rd Fleet under Adm. William F. Halsey. During the final year of the war the ship the flagship of Rear Admiral Oscar C. Badger II who commanded Battleship Division and took part in the U.S. invasions of Iwo Jima and Okinawa. The warship proved crucial in support of USMC landings across the Pacific.

There was no place in the post-war world for massive battleships and in 1948 she was decommissioned. However, her fate wasn't sealed – and unlike so many warships that were broken up and sold as scrap, the Department of Defense sought to maintain the class of fast battleships. She was returned to duty during the Korean War, and served as the flagship for Vice Admiral Harold M. Martin. On May 20, 1951 she fired her first short bombardment in the conflict, and took part in multiple subsequent seaborne sorties against Communist targets.

New Jersey remained active until 1957 when she was decommissioned a second time. However, she was briefly called up during the Vietnam War – becoming the only battleship to take part in the conflict in Southeast Asia. From 1967-69, the warship fired more than 5,600 rounds from her 16-inch guns and nearly 15,000 from the five-inch guns.

In December 1968, her colors were hauled down and the warship was again deactivated, until the 1980s when President Ronald Reagan called for a 600-ship U.S. Navy. In fact, all four Iowa-class battleships were reactivated and upgraded with new combat systems that replaced many of the ships' smaller five-inch guns with launcher for Harpoon anti-ship missiles, 32 Tomahawk cruise missiles and four Phalanx close-in weapon systems (CIWS). New Jersey and her sister battleships were rearmed for the threats of the late Cold War.

However, by the end of the 1980s, the Soviet Union was no longer the threat it once had been, and it was clear that the twilight of the battleship as the capital flagship for the U.S. Navy had arrived. All four of the majestic Iowa-class battleships shared the fate of many warships – and have been preserved as museums. One factor was that each could theoretically be reactivated for service if the need came.

Still in Service - As a Museum Ship

The New Jersey opened as a museum ship on October 15, 2001, and since that time it has continued to preserve the warship's history while also being among the most interactive museums in the country. Guided tours are available, but visitors can explore the ship and walk on more than seven different decks, which helps show how massive the battleship was – and it is easy to see how more than 1,900 sailors could easily call the ship home.

Today the greatest threat to the USS New Jersey isn't Russian hypersonic missiles or aircraft from a Chinese carrier – but rather the elements, which have taken a toll on the ship's deck and hull. The Battleship New Jersey Memorial and Museum, which is located on the Camden waterfront on the Delaware River across from Philadelphia, was recently awarded a $500,000 Preserve New Jersey Historic Preservation Fund Grant that will help refurbish the deck and take on other needed maintenance.

This will ensure that the old battle wagon could be returned to service but that it can also preserve the important historic legacy of the Big-J.