A New Law In India Threatens Their Muslim Minority 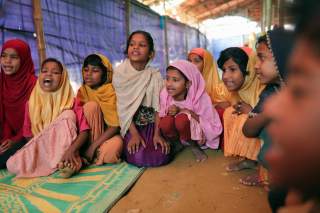 Last week Aung San Suu Kyi took the stand at the International Court of Justice to defend Myanmar against charges of genocide.

A 2017 military campaign against the Muslim Rohingya expelled more than 700,000 from Rakhine State into Bangladesh. Survivors recounted numerous mass executions, rapes and other atrocities. The ferocity and scale of this violence is based on longstanding denial of the Rohingya’s right to belong in Myanmar.

Nationalists have long derided the Rohingya as illegal Bengali immigrants. A 1982 citizenship law excluded them from a list of “national races” because they had not arrived in Myanmar before 1823.

The seeds of a similar situation have now been planted in India under an increasingly nationalist Bharatiya Janata Party (BJP). Like in Myanmar, the likely epicentre of a violent contest over who belongs and who does not is a remote state bordering Bangladesh: Assam.

This year, a statewide government program, known as the National Register of Citizens, verified the citizenship of all residents. It identified 1.9 million people as illegal immigrants.

As it became apparent that just as many Hindus as Muslims lacked adequate documentation, the BJP submitted a new bill to parliament, which was quickly passed by both houses. The Citizenship Amendment Act provides a path to citizenship for all Hindus, Sikhs, Jains, Parsis and Christians who can claim persecution in Pakistan, Bangladesh and Afghanistan and arrived in India before 2014.

Muslims are conspicuously absent from the list, despite the persecution of Ahmadis and Shia in the three states. No mention was given of the neighbouring states with some of the worst violations of minority rights: China and Myanmar. The reason is clear - the persecuted groups there are Muslim.

Those excluded from the National Register of Citizens can appeal to specially created foreigner tribunals, but these are likely to be highly politicised. The next and final step of appeal is the Supreme Court, but this is beyond the financial means of most.

Detention will then await, just as in Rakhine. The Indian government is currently building a 3,000-person detention centre in Assam’s Goalpara district. Unrecognised as citizens by Bangladesh, these people will be rendered stateless, just as the Rohingya before them.

If Assam’s history is any guide, this repression will be accompanied by political violence. The last period of turmoil over illegal immigration, known as the Assam Movement of 1979 to 1985, saw widespread protests, strikes and insurgency.

Ignited by claims voting rolls contained the names of hundreds of thousands of non-citizens, the period involved extensive communal violence. The main targets were people the movement deemed to be immigrants, particularly those of Bengal-origin. In a single incident, the Nellie Massacre, a mob killed more than 2,000 people.

I have written elsewhere about recent anti-migrant massacres in Assam in 2012 and 2014 in which mobs killed several hundred members of the Bengali Muslim and Advivasi communities. Widespread protests against the Citizenship Amendment Act have broken out in the state in recent days, not at the exclusion of Muslims as elsewhere in India, but at the impending naturalisation of Hindus and other groups.

The dangers of violence in Assam are real. A former chief minister of the state described it as a powder keg of ethnic tensions.

Assam’s future in a nationalist India

The BJP president, Amit Shah, has stated that the National Register of Citizens will be conducted throughout India. During the April 2019 national election, Shah said:

Illegal immigrants are like termites. They are eating the grain that should go to the poor, they are taking our jobs.

He said that after coming to power, the party would throw the termites into the Bay of Bengal but would grant citizenship to every Hindu and Buddhist refugee. This is similar nativist and genocidal language to that used by the Myanmar army chief as the military began its campaign against the Rohingya:

The Bengali problem was a longstanding one which has become an unfinished job.

It seems unlikely violence on the scale perpetrated by the military in Rakhine State in Myanmar will occur in India. The militaries of the two countries have very different relationships with civilian political actors, and Muslims play an important political role in Assam and can therefore (to some extent) moderate the behaviour of nationalists.

But India has set itself on a nationalist trajectory under the BJP, and the end point is uncertain. There were warnings of impending genocide in Myanmar in the years before 2017. By the end of that year it was too late. There are now warnings of similar violence against Muslims in India, but there is still time to act.

Chris Wilson, Senior Lecturer in Politics and International Relations, University of Auckland. This article is republished from The Conversation under a Creative Commons license. Read the original article.