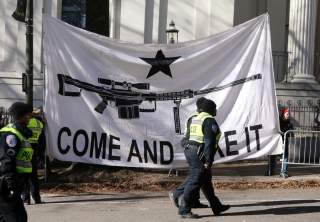 Red flag laws, which now have been enacted by 18 states, allow courts to determine whether certain individuals are such a serious risk of danger to themselves or others that they should be temporarily disarmed.

The basic concept of red flag laws makes some sense—they address specific threats instead of broadly infringing on the rights of all gun owners. But such laws should follow strict guidelines to protect the due process rights of those accused of being dangerous.

Last year, Colorado passed a decent, if still imperfect, red flag law. But the measure that passed in New Mexico appears to have been hastily written and largely devoid of important due process protections.

‘Take Guns First’ as the Norm

Unlike Colorado’s version, the new law in New Mexico made “take guns first, ask questions later” the norm, chose a low standard of proof for determining dangerousness, and failed to incorporate mental health and addiction treatment systems to help people deemed dangerous under the law to regain their Second Amendment rights.

In the U.S., absent true emergencies, the government has to follow certain rules before it can punish people or otherwise significantly restrict their constitutional rights.

Importantly, before the government can declare someone a danger to himself or others and confiscate his firearms, it first must hold a hearing where it produces evidence and gives the allegedly dangerous person a fair chance to defend against the accusation.

Both Colorado and New Mexico use a two-hearing process after the red flag petition is filed with a court.

After the first hearing—which is ex parte, meaning the allegedly dangerous person is not present—judges may issue orders disarming the accused for up to 10 days in New Mexico and 14 days in Colorado.

A second hearing, which does include the defendant, seeks to determine whether the initial order should be extended to one year.

In Colorado, the initial ex parte petition may be granted only if there is significant evidence that the accused poses an imminent threat to harm himself or others before the court could schedule a full-fledged hearing, and the facts point to an emergency situation. If there is not sufficient proof of an emergency, the court can’t order weapons taken away until the accused gets a day in court.

In New Mexico, judges at the first hearing only have two options—determine that the allegation is so weak that the petition should be dismissed entirely (which is uncommon), or order that the accused’s guns be taken away prior to the full hearing. Ex parte orders are not reserved for true emergencies, but are instead the default outcome in the first hearing.

Perhaps the most troubling defect in New Mexico’s red flag law is the low standard of proof required to disarm someone for up to a full year. Essentially, a standard of proof is the level of confidence a judge must have before making a certain determination.

For noncriminal cases, including red flag proceedings, there are two main standards of proof: (1) clear and convincing evidence and (2) preponderance of the evidence.

The preponderance standard is common in private civil lawsuits. But the Supreme Court has long held that it’s too low a standard for resolving other types of civil cases where something more than the defendant’s money is at stake.

For instance, preponderance of the evidence can’t be used in proceedings to commit people for involuntary mental health treatment.

Because red flag laws, like civil commitment procedures, result in fundamental rights being restricted, most states (including Colorado) use the higher “clear and convincing evidence” standard.

In New Mexico, civil commitment laws require proof by clear and convincing evidence to force someone to undergo mental health treatment. But the state’s red flag law allows the government to take away a person’s guns for a full year based on a preponderance of the evidence.

It should not be easier for the state to revoke a person’s Second Amendment rights for an entire year than to order him to receive mental health treatment or hold him in a mental health facility for more than 72 hours.

No Help to Those Deemed Dangerous

As we’ve stated repeatedly, red flag laws never should be about disarming people for the sake of disarming them. Rather, the goal should be to return those deemed dangerous under the law to a condition where they no longer are dangerous and can have their rights fully restored.

When a Colorado court grants a yearlong red flag petition, it also must hold a hearing to determine whether the person requires court-ordered mental health or addiction treatment. That way, those deemed dangerous can be directed to treatment for the underlying causes.

New Mexico mandates no such help to those it deems dangerous. The law makes a vague reference to courts making “recommendations” for “mental health or substance abuse evaluations.” But it does not require those recommendations be made, much less that courts order people to treatment as a step toward restoring their rights.

We all want to ensure that people who are dangerous to themselves or others don’t have access to firearms. Red flag laws seek to accomplish this with actions that involve the specific people involved, rather than a whole class of law-abiding and nondangerous citizens.

But when states cut corners with red flag laws, innocent people who are not at all dangerous are put at risk of losing their Second Amendment rights.

This article by Amy Swearer first appeared at The Daily Signal on March 9.