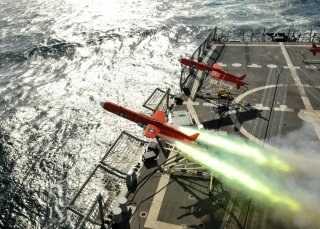 The U.S. Navy’s artificial intelligence-enabled, autonomous drones are already functional, and many new types of systems are set to advance beyond the conceptual and prototype stages. The Navy intends for these systems to not only network with one another but also function autonomously. To expedite this process, the Navy is standing up and improving its Rapid Autonomy Integration Lab.

Algorithms enabling greater levels of autonomy are progressing quickly, and the Navy is already leveraging them to engineer and test a fleet of coordinated, integrated unmanned systems that can network with one another, synchronize, and execute time-sensitive missions without needing human involvement. As part of the Navy’s Ghost Fleet Overlord program, these drones will not only utilize their autonomous capability on an individual scale, but will also participate in “collective,” autonomous missions that are enabled by common software interfaces and AI-enabled data processing. Navy weapons developers increasingly plan to improve levels of autonomy as technology progresses.

The first two of Ghost Fleet Overlord’s opening program vessels, Ranger and Nomad, were initially executed by the Strategic Capabilities Office, a specialized Pentagon unit designed to find, develop and integrate new innovations for operational use in the force. But due to their successful and rapid development, these two autonomous surface vessels have been transitioned to the Navy.

Alongside these, more prototypes are in development and on the way, Searles explained.

“Now we're in the second phase of prototyping. We have two more vessels that are Navy funded this time under construction, the first of which is delivered. That is GFE (Government Furnished Equipment) is being installed right now, and the other one is under construction. We also have two smaller type prototype vessels as well.

Autonomous unmanned systems are already reshaping Navy concepts of operation and will continue to do so at a blistering pace. Of course, while Pentagon doctrine ensures that no lethal force is authorized without a “human-in-the-loop,” unmanned systems will continue to perform a much wider range of operations than has previously been possible. For instance, a Ghost Fleet or group of integrated unmanned systems could survey an enemy coastline and test enemy defenses, assess a threat environment, and exchange relevant data regarding an optimal point of attack. Targeting specifics could be shared across a group of unmanned systems in real time with the hope of quickly pairing new targeting information with shooters of modes of attack to eliminate enemies quickly. Yet another key advantage with this is that unmanned systems improve survivability, as they can allow manned ships and sailors to operate at safer stand-off distances. In the future, for example, Sea Basing is expected to take on a larger role and big-deck amphibious assault ships may increasingly function as “mother ships,” performing command and control and operating an entire small fleet of drones at one time.