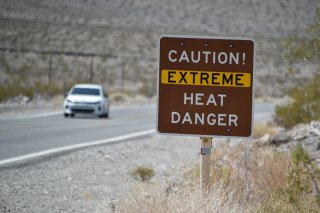 The United Kingdom on Tuesday broke its record for the highest temperature ever recorded as a scorching heat wave continued to engulf much of Europe.

“Well, I wasn’t expecting to see this in my career, but the U.K. has just exceeded 40 degrees Celsius,” Met Office chief scientist Stephen Belcher stated in a Twitter video.

The Associated Press reported that “the sweltering weather has disrupted travel, health care, and schools. Many homes, small businesses and even public buildings, including hospitals, in Britain don’t have air conditioning, a reflection of how unusual such heat is in the country better known for rain and mild temperatures.”

Reuters reported that southern and western Germany and Belgium were also bracing for potentially record-breaking temperatures as the heat wave continued to trek northeast. Also, on Tuesday, firefighters in southwestern France were battling to contain massive forest wildfires. Blazes in Greece, Portugal, and Spain already have destroyed thousands of hectares of land.

“In some southwestern areas, it will be a heat apocalypse,” meteorologist Francois Gourand told the news agency Agence France-Presse about the heat wave in France.

Belcher noted that such high temperatures in Europe were “virtually impossible” without human-driven climate change, warning that “we could see temperatures like this every three years” without serious action on greenhouse gas emissions.

Meanwhile, according to BBC News, heat-related deaths will likely rise threefold in the coming decades without government action on overheating homes. A recent survey showed that as many as 4.6 million homes could overheat during heat waves in England.

“We've been telling the government for over ten years that we are nothing like well enough prepared in the U.K. for the really hot weather we are seeing now,” Baroness Brown, deputy chair of the Climate Change Committee, told the news outlet. “We really do need to address the overheating risk in peoples' homes.”