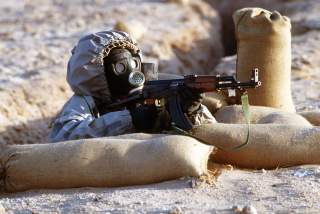 We all knew the Syrian regime of Bashar al-Assad dropped chemical weapons (CW) on his own people throughout the eight-year civil war. Some of the bombings were so horrific—think of the April 2017 sarin gas attack in Khan Sheikhoun and the April 2018 chlorine strike in Douma—that President Donald Trump ordered cruise missile operations on Syrian military facilities in retaliation.

What we didn’t know, however, was the extent of the Assad regime’s use of chemical munitions. In the most methodical study on the topic to date, the Berlin-based Global Public Policy Institute has published a report quantifying the number of CW attacks in Syria since December 21, 2012.

The number: 336, roughly 4.5 chemical strikes every month over the last seventy-four months. According to the authors’ calculations, 98 percent of the CW attacks recorded were the fault of regime or regime-affiliated forces. 89 percent of the chemical munitions were delivered via barrel-bombs, the oil drums filled with simple explosives that Syrian air crews have rolled out of helicopters onto civilian population centers ever since the regime started leveraging its air power against rebel-held territory.

Many of us comfort ourselves into believing that a government wouldn’t use these types of unconventional weapons on the battlefield unless it was required to prevent an opposing force from overrunning the capital. There is a reason why the world prohibits chemical weapons like sarin, weaponized chlorine, and VX nerve agent; in addition to the mass casualties these weapons can inflict on civilians, their effects on the human body are so traumatic that death is classified as a relief.

This is not how the Assad regime viewed its chemical stockpile. Far from being the weapon of last resort, the Assad regime blended its chemical weapons enterprise into its military doctrine, using them to soften up rebel resistance and terrify civilians into fleeing contested areas. Collective punishment against Syrians who happened to live in opposition-controlled cities and towns—including through merciless conventional bombing campaigns, extensive sieges, conditional amnesty (ie withdrawal) agreements, and CW use—was a bedrock principle of the regime’s strategy for survival and victory. What most in the West would view as random, arbitrary, pointless CW attacks far from the frontlines was in reality a deliberate strategy by the Syrian army to give civilians a choice: either stick with the rebels and die; flee your homes; or reconcile with the regime.

In 2015, at the same time Syrian troops were retreating from Idlib, the Assad regime continued to utilize chemical weapons on opposition-held towns that weren’t in any danger of being recaptured. As the report states, “...the regime chose to dedicate its Mi-8/17 fleet not to the defense of its collapsing frontlines [in Idlib] but to a campaign of collective punishment against civilian populations in the surrounding opposition-held areas. Of the fifty-eight chlorine attacks attributable to Syrian government forces in the context of the Idlib offensive between March and June of 2015, only three targeted areas that were in dispute, while the majority fell on rebel-held towns sometimes far behind the frontlines.”

The brutal strategy worked. Resistance to the regime was eventually breaking down out of exhaustion and a quenching for a return to normality. The study cited a survey of Syrian refugees that revealed an interesting finding: those who experienced violence from the Syrian regime were twice as likely to favor reconciliation with the Assad government than those who lived in neighborhoods that didn’t.

Assad, of course, wasn’t in a mood to consider reconciliation to begin. The only compromise Assad would be willing to explore was one on his terms. In his mind, reconciliation was a diplomatic way of forcing a surrender.

With Syria’s conflict entering its ninth year next month, Assad is in no mood to consider political compromise with his opponents. His decision to deploy chemical weapons, despite the risk of U.S. retaliation, will be traced back as a critical ingredient to his victory in the civil war.