New Research: There May Be a Way to Turn Cells into Mini-Factories for Materials 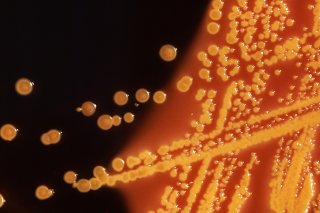 Buildings are not unlike a human body. They have bones and skin; they breathe. Electrified, they consume energy, regulate temperature and generate waste. Buildings are organisms – albeit inanimate ones.

But what if buildings – walls, roofs, floors, windows – were actually alive – grown, maintained and healed by living materials? Imagine architects using genetic tools that encode the architecture of a building right into the DNA of organisms, which then grow buildings that self-repair, interact with their inhabitants and adapt to the environment.

Living architecture is moving from the realm of science fiction into the laboratory as interdisciplinary teams of researchers turn living cells into microscopic factories. At the University of Colorado Boulder, I lead the Living Materials Laboratory. Together with collaborators in biochemistry, microbiology, materials science and structural engineering, we use synthetic biology toolkits to engineer bacteria to create useful minerals and polymers and form them into living building blocks that could, one day, bring buildings to life.

In one study published in Scientific Reports, my colleagues and I genetically programmed E. coli to create limestone particles with different shapes, sizes, stiffnesses and toughness. In another study, we showed that E. coli can be genetically programmed to produce styrene – the chemical used to make polystyrene foam, commonly known as Styrofoam.

In our most recent work, published in Matter, we used photosynthetic cyanobacteria to help us grow a structural building material – and we kept it alive. Similar to algae, cyanobacteria are green microorganisms found throughout the environment but best known for growing on the walls in your fish tank. Instead of emitting CO2, cyanobacteria use CO2 and sunlight to grow and, in the right conditions, create a biocement, which we used to help us bind sand particles together to make a living brick.

By keeping the cyanobacteria alive, we were able to manufacture building materials exponentially. We took one living brick, split it in half and grew two full bricks from the halves. The two full bricks grew into four, and four grew into eight. Instead of creating one brick at a time, we harnessed the exponential growth of bacteria to grow many bricks at once – demonstrating a brand new method of manufacturing materials.

Researchers have only scratched the surface of the potential of engineered living materials. Other organisms could impart other living functions to material building blocks. For example, different bacteria could produce materials that heal themselves, sense and respond to external stimuli like pressure and temperature, or even light up. If nature can do it, living materials can be engineered to do it, too.

It also take less energy to produce living buildings than standard ones. Making and transporting today’s building materials uses a lot of energy and emits a lot of CO2. For example, limestone is burned to make cement for concrete. Metals and sand are mined and melted to make steel and glass. The manufacture, transport and assembly of building materials account for 11% of global CO2 emissions. Cement production alone accounts for 8%. In contrast, some living materials, like our cyanobacteria bricks, could actually sequester CO2.

Teams of researchers from around the world are demonstrating the power and potential of engineered living materials at many scales, including electrically conductive biofilms, single-cell living catalysts for polymerization reactions and living photovoltaics. Researchers have made living masks that sense and communicate exposure to toxic chemicals. Researchers are also trying to grow and assemble bulk materials from a genetically programmed single cell.

While single cells are often smaller than a micron in size – one thousandth of a millimeter – advances in biotechnology and 3D printing enable commercial production of living materials at the human scale. Ecovative, for example, grows foam-like materials using fungal mycelium. Biomason produces biocemented blocks and ceramic tiles using microorganisms. Although these products are rendered lifeless at the end of the manufacturing process, researchers from Delft University of Technology have devised a way to encapsulate and 3D-print living bacteria into multilayer structures that could emit light when they encounter certain chemicals.

The field of engineered living materials is in its infancy, and further research and development is needed to bridge the gap between laboratory research and commercial availability. Challenges include cost, testing, certification and scaling up production. Consumer acceptance is another issue. For example, the construction industry has a negative perception of living organisms. Think mold, mildew, spiders, ants and termites. We’re hoping to shift that perception. Researchers working on living materials also need to address concerns about safety and biocontamination.

If humanity had a blank landscape, how would people build things? Knowing what scientists know now, I’m certain that we would not burn limestone to make cement, mine ore to make steel or melt sand to make glass. Instead, I believe we would turn to biology to help us build and blur the boundaries between our built environment and the living, natural world.

Wil Srubar is an Assistant Professor of Architectural Engineering and Materials Science at the University of Colorado Boulder.