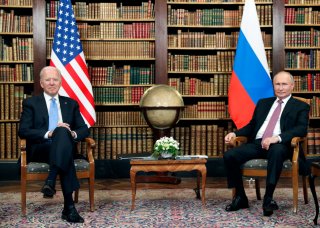 Officials from the United States and Russia are expected to meet in the coming weeks to talk about resuming inspections of nuclear weapons sites under the New START treaty, according to a new Bloomberg report.

The treaty, which was established by the Obama administration and extended by five years in February 2021 during the first weeks of Joe Biden’s presidency, limits the number of all deployed intercontinental-range nuclear weapons by Russia and the United States and requires both countries to allow on-site inspections of their nuclear weapons-related facilities by the other. Inspections were suspended in 2020 due to the Covid-19 pandemic.

During a press briefing on Tuesday, State Department spokesman Ned Price confirmed reports that a Bilateral Consultative Commission (BCC) meeting is in the works. The BCC oversees the practical implementation of the New START treaty.

“That’s the bilateral mechanism for discussing treaty implementation issues under the New START treaty,” he said.

“We have agreed that the BCC will meet in the near future, under the terms of the New START treaty, the work of the BCC is confidential, but we do hope for a constructive session,” he continued.

In the wake of Switzerland joining other countries in the West to sanction Russia over its ongoing war in Ukraine, sources close to Moscow told Bloomberg that Egypt’s capital city of Cairo is the likely destination for the continuation of the talks. The BCC held its last meeting in Geneva, Switzerland, in October 2021.

Diplomatic relations between the United States and Russia have soured considerably following President Vladimir Putin’s decision to invade Ukraine last February. But according to a Wall Street Journal report on Monday, National Security Advisor Jake Sullivan has engaged in recent months undisclosed talks with top Russian officials in hopes of reducing the risk that the war in Ukraine escalates into a nuclear conflict.

The news outlet cited U.S. and allied officials who confirmed that Sullivan held confidential conversations with Kremlin aide Yuri Ushakov and Russian Security Council secretary Nikolai Patrushev. It was unclear exactly on what dates and how many times Sullivan spoke with the officials.

Last week, in a pivot from Putin’s fiery comments in recent weeks, Russia’s Ministry of Foreign Affairs asserted that avoiding a nuclear clash is its top priority.

“We are strongly convinced that in the current complicated and turbulent situation, caused by irresponsible and impudent actions aimed at undermining our national security, the most immediate task is to avoid any military clash of nuclear powers,” the ministry said in a statement, adding that a nuclear war “cannot be won and must never be fought.”