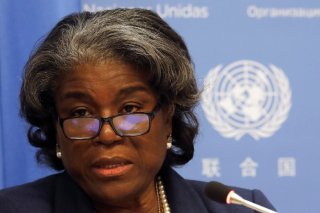 More than once of late, the new U.S. ambassador to the United Nations has declared that America’s “original sin” of slavery “weaved white supremacy into our founding documents and principles.”

The problem isn’t just that Ambassador Linda Thomas-Greenfield, a career diplomat who served as President Barack Obama’s Assistant Secretary of State for African Affairs, is wrong about the nation’s founding.

Nor is the problem just that she stated her views not only before the United Nations General Assembly but also before the National Action Network of the Rev. Al Sharpton—who, over the years, has used inflammatory anti-Jewish rhetoric, promoted black teenager Tawana Brawley’s fabricated story that she was raped by white men, was sued successfully for defamation, and has not always paid his taxes.

The greater problem is that in promoting her views, Thomas-Greenfield seems oblivious to the broader challenges that America faces on the world stage at this precarious moment for freedom and democracy.

No, America is not perfect, and yes, America has struggled mightily with race from its earliest days. Slavery was central to the southern economy through two-thirds of the nineteenth century; a civil war that ended slavery was followed by the legalized bigotry of Jim Crow; the civil rights movement triggered a violent white backlash; and racism remains deeply embedded in the hearts of all-too-many Americans.

But what Thomas-Greenfield seems to acknowledge somewhat grudgingly is that America was, and remains, an admirable “experiment” in self-government. It has made landmark progress on race over time—though surely not enough. And, because its government is accountable, its imperfect democracy is clearly favorable to the authoritarian alternatives of its global adversaries.

In her March 19 address to the General Assembly, the new U.S. ambassador cited the New York Times’ controversial “1619 Project,” which asserted, to the dismay of top U.S. historians of the nation’s early years, that America was founded explicitly to protect slavery—and not to create a government dedicated to pursuing the values reflected in our Declaration of Independence and Constitution.

In Thomas-Greenfield’s telling, racism is the world’s all-consuming evil, the poison that unites the United States with other nations. Racism, she says, is driving not just hate crimes in America but also Myanmar’s harsh crackdown on the Rohingya and China’s torturous abuse of Uighurs and other minorities.

What she never mentions is that in the undemocratic nations of Myanmar and China—unlike in America—the killings, torture, imprisonment, and other harsh abuses against these and other minorities is official government policy, and that the public’s right to protest such abuses does not exist.

At one point before the General Assembly, Thomas-Greenfield seemed to pay tribute to America’s experiment in self-government by suggesting that while we have “deep, serious flaws... we talk about them. We work to address them. And we press on, in hopes that we can leave the country better than we found it.”

A moment later, however, she suggested that to address racism around the world, the same approach would work. “We can do the same on a multilateral scale. Let us expose the racism and racial discrimination endemic in every society, around the globe... [L]et us leave our children a less hateful, more hopeful world.”

Actually, we cannot “do the same on a multilateral scale.” That’s because in China, Myanmar, Russia, Iran, and many other places, the autocrats rule, leaving their citizenry with few tools to shape policy.

In the aftermath of two very deep recessions and a financial crisis in the last two decades, and of decades of stagnant living standards for many in the middle and at the bottom, people in the West and elsewhere have lost some confidence in democratic government, fueling the rise of populist movements. Meanwhile, autocrats in Beijing, Moscow, and elsewhere are promoting the benefits of their iron-fisted alternatives. So, this is a crucial time for the future of freedom and democracy.

Asked on CBS’ “Face the Nation” in mid-April whether she was “comparing bigotry in America to mass atrocities carried out against minorities around the world,” Thomas-Greenfield acknowledged the distinction between free and unfree societies.

“Our country, the uniqueness of our country,” she said, “is that we can self-criticize and we can move forward and our values are clear... I don’t think you will see a Uighur, a Chinese Uighur, getting on the national stage acknowledging China’s issues with human rights.”

No, you won’t. And, at a time when the United States is battling the emboldened autocrats for influence around the world, that—and not ugly fictions about America’s founding—is the point that our ambassador at Turtle Bay should be stressing.