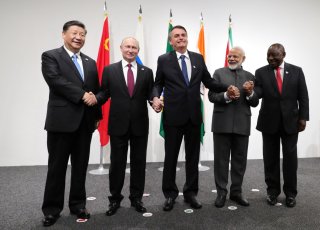 China hosted the first day of the fourteenth annual BRICS Summit—a series of meetings involving the leaders of Brazil, Russia, India, China, and South Africa—on Wednesday, amid a series of major shifts in the global world order and rising geopolitical tensions in Eastern Europe and East Asia.

Chinese president Xi Jinping opened the summit on Wednesday, emphasizing the five nations’ “shared desire to meet challenges together through cooperation,” according to China’s state-run Xinhua news agency. The Chinese leader also urged the countries in attendance to “embrace solidarity and coordination and jointly maintain world peace and stability.”

The BRICS group comprises the five largest developing economies; together, its members constitute forty percent of the world’s population and one-fourth of global gross domestic product. The group includes the two most populous nations in the world, China and India, as well as Russia, the largest in terms of land.

Chinese state media has praised the role of the five-nation grouping, claiming that ties between the BRICS countries had increased “multilateral cooperation with non-Western styles, forms, and principles [of government”—marking a positive contrast to the actions of the United States, which it accused of “pulling its Western allies to ‘rebel’ against globalization.”

Despite considerable internal differences within the bloc, including a decades-old rivalry between China and India, all of the BRICS countries have resisted full political alignment with the West. Of the five BRICS nations, only one, Brazil, voted in the United Nations General Assembly to condemn Russia for invading Ukraine in February; Russia voted against the measure, while the other three countries abstained. Even Brazilian president Jair Bolsonaro refused to personally condemn Putin, whom the West has widely framed as the driving force behind the Russian invasion.

In his remarks on Wednesday, Xi appeared to criticize the United States and NATO, describing the Russian invasion of Ukraine as a “wake-up call for all in the world.” “Blind faith in the so-called ‘position of strength’ and attempts to expand military alliances and seek one’s own security at the expense of others will only land oneself in a security dilemma,” Xi said, repeating the controversial argument that the Russian invasion of Ukraine was mainly prompted by legitimate security fears rather than Putin’s personal ideology.

A virtual meeting between Xi and his counterparts Jair Bolsonaro, Vladimir Putin, Narendra Modi, and Cyril Ramaphosa is expected to take place on Thursday morning, followed by further meetings between high-level officials from the five countries. Analysts have predicted that Xi will defend China’s governance record and highlight the country’s successful development to the other attendees amid the lifting of strict Covid-19 lockdown measures in Shanghai and Beijing.