The Next China Military Threat: The World's Biggest Mobile ICBM? 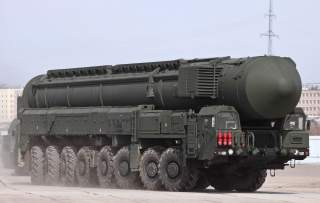 Russia’s RS-28 “Sarmat” ten-ton payload liquid-fueled intercontinental ballistic missile (ICBM) will be the world’s largest nuclear strike missile when it enters production, as early as 2021. Reportedly it may carry up to fifteen 350 kiloton warheads, or up to twenty-four of the new “Avangard” nuclear-armed Hypersonic Glide Vehicle (HGV) warheads.

But since mid–2017, Chinese sources have revealed details of an even larger twenty-ton payload solid-fuel space-launch vehicle (SLV) that could form the basis for what might become the world’s largest “mobile” ICBM.

In May 2017, the now closed Chinese website ChinaSpaceFlight.com offered the first depiction of the family of solid-fuel SLVs to be offered by the China Aerospace Science and Industry Corporation (CASIC). Seen in this image for the first time was the twenty-ton payload Kuaizhou-21, or KZ-21, and the KZ-21A, which adds two side boosters.

Likely since the middle of the last decade, CASIC had been given the go-ahead by the Chinese government and the People’s Liberation Army (PLA) to develop a line of solid-fuel SLVs. These would compete for domestic and international launch services with the China Aerospace Science and Technology Corporation (CASC), which builds China’s family of Long March liquid-fueled SLVs and ICBMs, and its latest DF-31, DF-31A, and DF-41 mobile solid-fuel ICBMs.

So far, CASIC’s 1.2-meter diameter road-mobile Kauizhou-1/IA SLV, based on its DF-21 medium range ballistic missile, has made four successful launch missions through September 29, 2018. In 2019, CASIC may launch its first 2.2-meter diameter road-mobile and solid-fueled KZ-11 SLV, which has the same diameter as CASC’s DF-41 ICBM. The latter also forms the basis for CASC’s Long March-11 solid-fuel SLV, which has been launched five times as of December 21, 2018.

The KZ-21, however, features an unprecedented 4-meter diameter solid-fuel rocket motor, larger than the 3.7-meter diameter Solid Rocket Booster (SRB) developed by the former Thiokol Company to help launch the U.S. Space Shuttle. A ChinaDaily report from 25 December 2017 noted that CASIC would begin testing the engine for the KZ-21 in February 2018.

That month, an image appeared on Chinese web pages of CASIC engineers standing beside elements of the 4-meter solid rocket motor. There have been no subsequent reports or images to confirm successful testing of this engine, but Chinese sources indicate the KZ-21 SLV could be in service by 2025.

As in the United States and Russia, China has shown ample precedent for SLVs assisting the development of ICBMs, and vice-versa. CASC’s liquid-fueled DF-5 ICBM served as the basis for the Long March-1 SLV, and the multiple satellite-launching Long March-2C aided the follow-on development of the latest ten-warhead capable DF-5C.

To date, there has been no public Chinese suggestion that the KZ-21 will become the basis for the world’s largest solid-fuel ICBM, but it would be foolish to assume China’s strategic planners have decided to forego such an option. China may now be deploying its three-thousand-plus-kilometers range DF-17, armed with a small maneuverable HGV warhead. If sized similarly to Russia’s Avangard, a twenty-ton payload KZ-21 might carry close to fifty HGVs.

According to some Asian military sources, a PLA Rocket Force ICBM unit has about six missiles, which for the KZ-21 could approach three hundred warheads. Thus, potentially, five KZ-21-based ICBM units could nearly match the 1,550 warheads deployed each by the United States and Russia, pursuant to the 2010 New Start Treaty which expires in 2021. It is very likely that China could build transporter-erector-launchers (TELs) large enough to move KZ-21-based ICBMs a short distance from various nodes of the PLA Rocket Force’s (PLARF) “Underground Great Wall” of tunnel ICBM bases for quick staging.

Add to this the potential for CASIC’s KZ-1 and KZ-11 SLV production lines to also be turned to producing new mobile ICBMs. In that case, starting in the early 2020s, the PLA will have plenty of capacity to build ICBMs which could “sprint” to match or exceed the deployed nuclear warhead arsenals of Russia and the United States.

China does not reveal its current ICBM and warhead numbers. Despite decades of U.S. government attempts to engage PLA and political officials in preliminary dialogues on strategic weapons, China likely will continue rejecting suggestions that it begin to exercise strategic nuclear transparency. Instead, China has spent decades trying to convince the world that it has no ambitions for strategic nuclear superiority, will not engage in a nuclear arms race, adheres to a “No First Use” of nuclear weapons pledge, does not proliferate, and seeks merely to have an “assured” means of nuclear retaliation to deter nuclear attack.

Russia for decades ran a similar deception gambit, whilst at least it pretended to engage in normative arms control. It thusly co-opted generations of U.S. arms control devotees into believing that U.S. defense and verification actions—rather than Soviet ideology, strategic goals, capacities, and serial violations—were the main threat. U.S. arms controllers obsessively insisted the latter should be ignored or downplayed in order to “keep the Soviets at the table.” Unsurprisingly, Moscow regularly ran the table until Reagan called the game.

Given that such deception stratagems are even more central in China’s millennia of statecraft, U.S. policymakers must now be more vigilant and realistic, and apply the expensive lessons from decades of Soviet/Russian deception/diversiya. The U.S. focus must be on Chinese goals, capabilities, and actions, and not on bringing them to the wormy table of arms control. China likely will continue to eschew the “arms control process,” unless it determines it must be exploited to better gain time, concessions, and U.S. self-constraint, per the Soviet/Russian example.

Until very recently, the United States largely has willfully deceived itself about converging Chinese threats, thus obviating the need for China to deign to engage in the arms control gambit. The dominant non-status quo power, China views arms control as another meddlesome aspect of the global state system whose architecture, legitimacy, and norms it rejects.

For decades, top Chinese leaders ritually have denied any ambitions for global “Hegemony.” Now, in 2019 it is increasingly clear that China seeks to reshape global economics and politics to serve the goals of the Chinese Communist Party (CCP) leadership, and that it is building a PLA which could soon have the means to impose the CCP’s will regionally, globally, and in Space. Given such ambitions it seems highly likely that CCP leaders long ago decided they must attain nuclear superiority.

But even before such a nuclear buildup, it is imperative to consider the possibility of offensive nuclear cooperation between Russia and China, inasmuch as they have held two publicly announced “strategic defense” exercises in 2016 and 2017. Russia and China may calculate that such a nuclear “tilt” against the United States could be used to dissuade and deter U.S. military support for Taiwan, South Korea, Japan, or multiple Russian targets in Europe. However, with missile platforms like the KZ-21 China would have the means to seek nuclear superiority over Russia in the 2030s and beyond.

Richard D. Fisher, Jr. is a senior fellow with the International Assessment and Strategy Center and the author of China’s Military Modernization, Building for Regional and Global Reach, Stanford University Press, 2010.