The Next Coronavirus Relief Bill Must Address Massive Oversight Issues 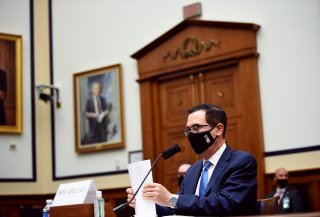 As Congress considers another coronavirus relief bill, it must not only build an effective and competent oversight mechanism, but also protect that oversight from interference by the executive branch. While the CARES Act, passed in March, created several oversight mechanisms—including the Congressional Oversight Commission, the Special Inspector General for Pandemic Recovery, and the Pandemic Response Accountability Committee—oversight was slow to start, ineffective, and inhibited by the president. This time must be different.

The Pandemic Response Accountability Committee (PRAC) was created to oversee the government’s implementation of the CARES Act in its entirety, but it has faced intense executive interference and is still without leadership. Within days of being nominated to chair the committee, President Donald Trump fired Glenn Fine; furthermore, Trump left the position of Special Inspector General for Pandemic Recovery (SIGPR) vacant for over two months.

To address both the lack of leadership and presidential interference, Congress should retain the power of appointing and removing oversight officials for itself. As PRAC displayed, if Trump has the ability to remove a leader of an oversight committee, he will. By keeping staffing authority for itself, not only can Congress control how quickly leaders are appointed, but oversight officials can perform their job without fear of being unreasonably fired. Furthermore, constant leadership will maintain consistency and integrity in the groups’ efforts.

But, Congress needs to take this responsibility seriously. The Congressional Oversight Commission, which Congress appoints members to, is still without a chairperson. The delay in selecting  a chair impedes the commission’s efforts in overseeing $500 billion in relief funds, including by preventing it from hiring staff. One commission member, Bharat Ramamurti—who for weeks was the only member on the commission—tweeted that “the lack of Chair and staff are serious obstacles to performing robust oversight.” However, if House Speaker Pelosi and Senate Majority Leader McConnell would put aside partisan bickering and select a candidate for chair, these issues could be remedied, and oversight of the corporate fund effectively carried out. Congress must commit to working in a bipartisan manner to quickly appoint oversight officials.

Furthermore, given that corruption tends to increase during times of crisis and Congress is doling out trillions of dollars, American citizens must be assured that relief money is being spent responsibly and effectively. Unfortunately, up to this point, that is not the case. The United States has been inundated with corruption and misspent money, and without proper oversight, these blunders will continue.

The U.S. has struggled with COVID-19-related fraud, according to a survey of anti-fraud professionals, including: personal protective equipment and ventilators that were either bought and never received or sold at unusually high prices; a black market for medical supplies; faulty equipment; cyber-attacks on healthcare systems; embezzlement of healthcare funds; and bribes demanded by medical personnel. In addition, there have been several reports of relief money being misspent by the government. Over a billion dollars allocated for assisting small businesses have been given to large companies, including publicly traded companies and businesses where executives earn millions of dollars. Additionally, over one million stimulus checks—worth close to $1.5 billion—were sent to deceased individuals.

Proper oversight directed by committee leadership will help protect against these errors. Congress must examine both government response and oversight failures and address them in the next bill. Because response time is critical, Congress should have a plan ready for implementing oversight mechanisms before passing the bill. Creating a roadmap in advance for the formation processes and function of oversight committees will reduce the amount of time it takes for meaningful oversight to begin.

In mapping out how oversight will work, it is essential that the bill language accurately reflects the plan. Using the language of the CARES Act itself, the Treasury Department argued, although later walked back, that it was exempt from PRAC oversight. The Office of Management and Budget sent a guidance memo that omitted several reporting requirements—including ones essential to determining the success of the Act’s goals—mandated by the CARES Act. And in a statement, the president suggested his office will not let the SIGPR “issue reports to the Congress without the presidential supervision.” Given that PRAC and the SIGPR are meant to protect against waste, fraud, and corruption—which the response thus far has suffered from—it is essential that each has the full authority, power, and ability to perform its oversight functions. In this next bill, Congress must be deliberate in its wording and explicitly state which executive agencies are required to comply with which oversight mechanisms employed. The bill cannot leave any room for doubt about what Congress meant or what is required of the agencies.

Especially now as President Trump is trying to block money allocated for the Center for Disease Control, the State Department, and the Defense Department, it is vital that these agencies receive independent, effective oversight. As Congress crafts and debates the new relief bill, it should reassert its oversight authority and protect against attacks by the president to dismantle accountability mechanisms.

Katie Galgano is a researcher at the Center for a New American Security specializing in democracy and governance issues, including national security institutions and congressional oversight.