The Next Space Race: Is America Ready For Chinese Space Drones? 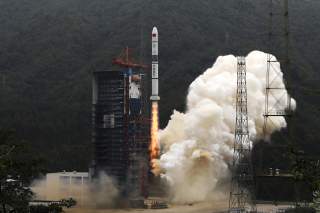 Key point: China is making impressive strides in a domain once dominated by America.

In a major breakthrough, China has unveiled a formidable new high-altitude drone that could give its military a significant advantage.

Designed to operate in “near space,” 12.5 miles above sea level or higher, China’s new drones can break through air defenses, avoid radar detection, and collect valuable intelligence while staying well beyond the range of anti-aircraft fire.

Operating at these heights has been a challenge that has long eluded engineers. Dubbed a drone “death zone” as the air at this elevation makes it difficult to generate lift and extremely low temperatures cause electrical equipment like batteries to fail.

Until now, the U.S. military’s RQ-4 Global Hawk has been the highest-flying drone, operating at altitudes of 60,000 feet. But in a recent test, Chinese engineers surpassed that, flying an experimental drone at 82,000 feet.

At a research facility in Inner Mongolia, two drones were attached to a weather balloon and deployed at 30,000 feet and 82,000 feet. Roughly the size of a bat and weighing about as much as a soccer ball, the drones were launched by an electromagnetic pulse sling shot that catapulted them out at 60 mph.

The drones coasted to targets over sixty miles away, automatically adjusting their flight path and sending data back to a ground station. Most notably, due to their small size, they were barely detectable on radar during their test flight.

The drones were equipped with several sensors, including a terrain mapping device and an electromagnetic signal detector that would allow it to pinpoint military troops. However, the drones could not carry cameras, as that would require a bulky antenna to transmit photo or video data, which would throw off its delicate aerodynamics.

Its wings and body are seamlessly blended into a flat, tailless design that generates lift in the thin atmosphere of near space. Some models, like the two recently tested, do not have engines, instead drifting to their targets like a glider.

“The goal of our research is to launch hundreds of these drones in one shot, like letting loose a bee or ant colony,” Professor Yang Yanchu, the head of the project from the Chinese Academy of Sciences, told the South China Morning Post.

Militaries have long sought to take advantage of near space as it offers an opportunity to gather intelligence over large-areas without the costs or vulnerabilities of satellites.

As advanced militaries increasingly rely on satellites for everything from intelligence to communications to missile guidance, they have become high-priority targets during wartime, and are difficult to defend. Therefore, having near space vehicles capable of gathering intelligence, relaying data, and serving as a backup or even replacement satellites would be invaluable.

But so far no country has been able to operate in near space, as most aircraft cannot fly at such high altitudes and it is too low for satellites.

China has been actively developing new technology that would allow it to operate in this largely uncontested new frontier with its Scientific Experiment System of Near Space, a pilot program led by the Chinese Academy of Sciences.

In June, China test flew a solar-powered drone at 65,000 feet. The massive drone, dubbed the Caihong-T4, has a wingspan of 130 ft and is designed to stay aloft for months at a time with minimal supervision.

Not to be outdone, NASA currently holds the record with its Helios Prototype, which soared to nearly 97,000 feet on solar power.

But unlike these prototypes and current high-altitude drones which cost millions of dollars, China’s newest high-flying drone would only cost a few hundred yuan.

With these cheap, stealthy high-altitude drones, China has leapt ahead in the near space race.

Eugene K. Chow writes on foreign policy and military affairs. His work has been published in The Week, Huffington Post, and The Diplomat. This article first appeared in 2017.