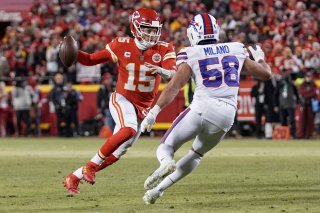 In addition to its recent labor deal, baseball also made a pair of streaming deals.

Days later, The Wall Street Journal announced the near-completion of another baseball deal,  this time with Comcast and NBC Universal, to put games on Peacock. That deal would include eighteen games over the course of the season, most of them played on Sundays at 11:30 a.m. The first game would be simulcast on NBC, bringing baseball back to that network for the first time since the early 1990s. The rest would stream on Peacock.

Now that the baseball deals are (mostly) done, attention is turning to what the NFL will do with its remaining rights package.

According to a CNBC report, Sunday Ticket rights could fetch as much as $3 billion annually, which would double what DirecTV is currently paying for the package. Apple has now taken the leap into sports with the baseball deal, but the NFL venture would cost considerably more money.

Sunday Ticket has been exclusive to DirecTV since its launch in 1994, but the deal is set to expire after the upcoming NFL season. Commissioner Roger Goodell has said that the league would like a streaming partner for Sunday Ticket.

One expert told CNBC that the league could divide the rights among multiple outlets, possibly with DirecTV retaining the satellite rights and another company handling streaming. In that scenario, DirecTV would retain “out-of-home screens in commercial properties such as airports, bars and restaurants to protect its ‘substantial commercial establishment business,’” media rights advisor Lee Berke told CNBC.

Known bidders include tech giants Apple and Amazon, as well as longtime league broadcasting partners Comcast/NBC Universal and Disney/ABC/ESPN. Amazon is already in business with the NFL, having agreed to a deal for Amazon Prime Video to become the exclusive streaming partner for Thursday Night Football.

While some reporting has indicated that a decision on the fate of Sunday Ticket is likely this offseason, CNBC stated that “a deal isn’t likely to happen soon and could come during the 2022 season.” The report did say that Goodell could address the issue at the NFL’s annual meeting of owners, which is scheduled for later this month.

Also up for grabs is a stake in the NFL’s media arm, which includes NFL Network, NFL Redzone, NFL.com, and more. Major League Baseball sold its MLB Advanced Media platform, later known as BAMTech and eventually Disney Streaming Services, for $2 billion in 2017.

Apple is reportedly interested in bidding on that platform as well as Sunday Ticket and a separate deal for the league’s mobile rights, which were formerly held by Verizon. Such a deal would put the NFL directly on fans’ iPhones.

“I don’t think they want everything to be with Amazon,” Berke told CNBC of the talks. “And Apple has a tremendous need for additional content not only to grow their Apple TV+ service but also to grow sales of their own hardware and software worldwide.”

A note from Evercore from March 9, also quoted by CNBC, called the possibility of grabbing Sunday Ticket huge for Apple.

While the once-a-week baseball package is “unlikely to truly move the needle” for Apple’s streaming efforts, a successful NFL bid likely would.

“Sunday Ticket would be a different story as it is the only place to watch out of market games of America’s most popular sport,” the note said. “Live sports rights are an area where Apple can leverage its significant financial firepower to win rights and also has the technical infrastructure to deliver a great user experience.”

NFL rights are expensive because pro football games are the most popular show on television, drawing viewers beyond anything else offered. Of the hundred most-watched TV broadcasts in 2021, according to Variety, thirty-nine of them were NFL games, led by the Super Bowl.

Sunday Ticket is a way for fans to watch games of teams outside of the fan’s home market. Reporting last year indicated that once it moves to a new provider, Sunday Ticket may offer fans the chance to purchase individual games, or possibly only the games of one particular team.