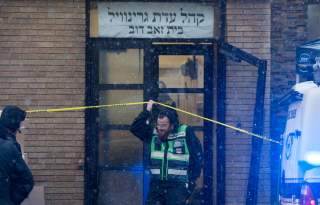 One of the New Jersey gunmen who caused a shootout Friday resulting in six deaths had a social media page with anti-Jewish and anti-police rhetoric, according to officials and media reports Wednesday.

The two suspects, who are dead, have been identified as David Anderson and Francine Graham, NBC News reported. The shoot-out lasted for hours in Jersey City and a Jewish supermarket was targeted, Democratic Jersey City Mayor Steven Fulop wrote Wednesday.

Anderson, 47, followed the Black Hebrew Israelite movement, NBC News reported. Members of this movement believe they are descended from ancient Israelites. It’s not yet confirmed that whether one-time follower posted the anti-Jewish and anti-police content himself, or if somebody else posted it to his account for him.

“We now know that this disgusting act of violence was a deliberate attack on the Jewish community in Jersey City,” Democratic New York Gov. Andrew Cuomo said.

.@NYGovCuomo announces increased patrols near synagogues: “We now know that this disgusting act of violence was a deliberate attack on the Jewish community in Jersey City.”

A note containing religious writings was found in the van used in the shootings, according to NBC News.

“There were many other targets available to them that they bypassed to attack that place. So it was, clearly, that was their target, and they intended to harm people inside there,” Public Safety Director James Shea said.