No, Aliens Have Not Landed on San Francisco’s Now-Humming Golden Gate Bridge 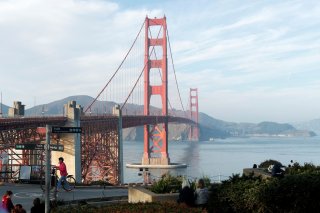 There have yet to be any sightings of UFOs or ghosts, but people who live near San Francisco’s iconic Golden Gate Bridge are hearing strange musical sounds.

There is, however, nothing paranormal about it—the bridge’s new sidewalk railing slats hum loudly when the wind passes through them.

The eerie sounds were particularly pronounced over the weekend when wind gusts reached between 45 and 60 mph. There were reports of people hearing such humming miles away.

“The new musical tones coming from the bridge are a known and inevitable phenomenon that stem from our wind retrofit during very high winds.”

Or in other words, the 746-foot-tall landmark has transformed into a giant woodwind instrument.

“As part of the design process, the district did extensive studies on the impacts of the project, including wind tunnel testing of a scale model of the Golden Gate Bridge under high winds,” Cosulich-Schwartz added.

The retrofit was “necessary to ensure the safety and structural integrity of the bridge.”

Such sounds emanating from the bridge will likely continue, as city officials confirmed that there are no planned fixes in the works.

That would certainly be bad news for some nearby individuals who are clearly unhappy about the free music.

“This is going to seriously cause people to lose their minds. Possibly me,” one person tweeted.

There are, however, people who are taking it all in stride.

“Now when are they going to install these on the Bay Bridge to harmonize with the Golden Gate Bridge’s music?” one individual tweeted.

“It was our first time hearing it so loud today! So crazy but also kinda beautiful!” another person tweeted.