No, America Is Not Ready to Counter China and Russia in the Arctic 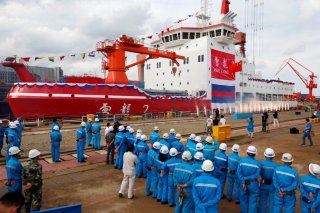 The strategic jockeying with China and Russia are important developments in the U.S. Arctic Strategy and a far cry from half a decade ago, when calls for the United States to wake up about its Arctic destiny were in their infancy. For instance, take this summary from the June 2019 DOD Report to Congress on Arctic Strategy: “The United States has...broad, interlocking sets of national security interests related to the Arctic region…The Arctic as a potential corridor for strategic competition. The Arctic is a potential avenue for expanded great power competition and aggression spanning between two key regions of the ongoing competition…the Indo-Pacific and Europe-and the U.S. homeland. U.S. interests include maintaining flexibility for global power projection, including by ensuring the freedom of navigation and overflight; and limiting the ability of China and Russia to leverage the region as a corridor for competition that advances their strategic objectives through malign or coercive behavior.”

The Arctic has been an area often neglected by U.S. policymakers, but is a key region in global power politics. Due to the effects of climate change, not only are new economic opportunities opening up in the Arctic, but major global powers are increasingly posturing intentions to dominate in the region. Unfortunately for U.S. strategists, Washington woefully behind the curve. Take the often-cited example of icebreakers, the U.S. Coast Guard maintains only two icebreakers. While the Chinese also only maintains two, to place those numbers into perspective, Russia has at least forty icebreakers currently in its fleet, with an estimated thirteen more nuclear-powered vessels to be deployed by 2035. While using icebreakers as the sole metric for gauging strategic competition in the arctic is of course flawed, considering the varied types of domain threats faced by adversaries like China and Russia, indeed gaps do exist and the icebreaker fleet is just the tip of the iceberg, if you will excuse the pun.

According to the U.S. National Defense Authorization Act for 2021 currently working its way through Congress, citing a Coast Guard Strategic Outlook from April 2019, “Demonstrating commitment to operational presence, Canada, Denmark, and Norway have made strategic investments in ice-capable patrol ships…The United States is the only Arctic State that has not made similar investments in ice-capable surface maritime security assets.”  In addition to steps to address these investments, the House bill also calls for the establishment of an Arctic Shipping Advisory Committee and calls on the Coast Guard to provide a report on the Arctic capabilities of the Armed Forces (with particular attention paid to comparisons with foreign Armed Forces). Finally the bill also calls on the Department of Defense to establish a DoD Regional Center for Security Studies for the Arctic, a large step in the direction of spreading domain knowledge.

On a macro-level, U.S. global strategy has become increasingly rudderless and unsustainable in the new millennium. The importance of the Middle East as an area of prime concern has decreased, and alongside that trend, the rise of China has become ever-present in U.S. decision-makers’ minds. The Obama Administration attempted to term this radical shift in priorities as a “pivot to Asia,” focusing primarily on containment of China through economic means, most notably the TPP (Trans-Pacific Partnership) trade agreement. During the current administration, China hawkishness has been pushed into overdrive, and both the Trump and Biden campaigns are exchanging jabs about who is going to be tougher on China, at least for the election season, challenging China’s unfettered rise has become an important priority across the political spectrum.

As is self-evident, China presents a threat wholly different to any the United States has faced throughout its history. Beijing has engaged in rampant disregard for international law and norms (as we have seen with the South China Sea disputes) and outright disdain for democracy and human rights (in Hong Kong and the grotesque plight of the Uyghur communities in China). Moreover, given the global economy’s increasing reliance on China, it remains clear that Beijing will be a multifaceted and complex issue that generations of U.S. policy-makers will have to face.

China’s meteoric rise has gone on almost unchecked and even mainstay principles in U.S. global strategy have been completely abandoned in this neglect. Consider, for instance, China’s increasing encroachment into the Western hemisphere, attracting nineteen countries in Latin America and the Caribbean to sign up for President Xi’s Belt and Road initiative (BRI). China has made inroads in virtually every region of the globe. From the Indo Pacific to Africa to Europe and Latin America, China has begun positioning itself and challenging the international order. The Second Cold War has already begun, and the U.S. has been basking in the warmth for far too long.

China in January 2018, laughably for the cartographical community, declared itself as a “near Arctic state” and began preparations for a Polar Silk Road plan. The strategic implications of Arctic economic opportunities are not yet entirely clear, but what is clear is China has expressed a determination to be a player in an (up till now) relatively exclusive game. Similar to the BRI, China will use investment as a ticket to the show, in 2013 China obtained observer status in the Arctic Council, the intergovernmental forum concerned with cooperation in the Arctic consisting of the “Arctic States” (U.S., Canada, Denmark, Finland, Iceland, Norway, Sweden, and the Russian Federation). Furthermore, China is working with Russia on projects extracting energy sources, beneath the permafrost from the Yamal Peninsula in northern Russia, and in 2018 Russia and China launched a joint venture to build an ice-capable LNG tanker led by Cosco and Sovcomflot, with Russian energy group Novatek and Silk Road Fund picking up the tab. Countering an adversary like Russia in the Arctic presents a broad array of challenges, but the specter of a joint Sino-Russian challenge to the U.S. in the Arctic is a techno-thriller nightmare waiting to happen, that America is woefully unprepared to deal with.

The Arctic is not merely a “potential corridor for strategic competition,” or a “potential avenue for expanded great power competition.” That game has already begun and U.S. policymakers are lagging behind their counterparts in responding to that threat. A U.S. Geological survey estimated that the Arctic holds approximately ninety billion barrels of undiscovered oil, which would account for around 13% of the global supply, with around a third of the Earth’s undiscovered natural gas. The rush has begun, and the United States is currently incapable of leading the charge.

The Trump administration has shown a willingness to leverage some of these natural resources, when back in 2017, with the passage of a controversial tax bill, Congress decided to allow U.S. energy firms to begin exploring the possibilities of natural resources in the Arctic National Wildlife Refuge (ANWR). Administered by the U.S. Department of Interior the ANWR is a large swath of “The Last Great Wilderness,” the corridor consists of around 78,000 km² on Alaska’s North Slope, an area roughly the size of the Czech Republic. The administration has gone ahead with plans to begin opening up the area for oil and gas drilling, through the establishment of a leasing program for energy firms. With energy dominance an important priority for the Trump Administration, it is unlikely calls from environmentalists, and local tribesmen that depend on the porcupine caribou, will halt this effort. (However, low oil prices and a drastic drop in global demand could slow these plans.)

So far, the United States has turned a blind eye to China’s ambitions in virtually every region of the world. Those ambitions have been targeted onto the Arctic, and in order to prevent Russia and China from dictating the game for the entirety of the region, America must do more to prepare itself to defend its interests in the Arctic. Exploration, domain knowledge, and Coast Guard reports, are all important steps, coupled with Congressional plans to build six more icebreakers in the coming years that would put a dent in the balance. That balance, which if Russia and China are teaming up for joint ventures in the Arctic, would stand at around forty-two icebreakers to eight, in the Sino-Russian favor. If the Pentagon believes its mission in the Arctic should be “limiting the ability of China and Russia to leverage the region as a corridor for competition that advances their strategic objectives,” it is woefully unprepared to carry out such a mission.

Michael R. G. Lyons is a researcher based in Germany, who has focused on Security issues in Europe and the Middle East.  He has worked with the Kennan Institute and is a graduate of the Vienna School of International Studies. Any views and opinions expressed in this article solely represent those of the author, and do not represent the positions of any institution.