No, China Is Not Targeting Your Kids with ‘Rainbow Fentanyl’ 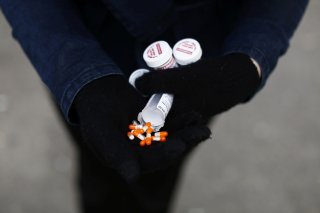 Something called “rainbow fentanyl,” a new variation on the synthetic opioid that has been wreaking havoc for the last several years, is suddenly all over the news. It’s led to warnings from various sectors of the government and law enforcement. At the same time, it has been caught up in existing cultural and political bugaboos, from border politics to the idea that touching one speck of fentanyl can instantly kill, to longstanding urban legends about tainted Halloween candy.

It started in late August when the Drug Enforcement Agency issued a warning called “Brightly-Colored Fentanyl Used to Target Young Americans.” The DEA said that it had seized “ brightly-colored fentanyl and fentanyl pills” in eighteen states up to that point. It called the drug “rainbow Fentanyl.”

“Rainbow fentanyl—fentanyl pills and powder that come in a variety of bright colors, shapes, and sizes—is a deliberate effort by drug traffickers to drive addiction amongst kids and young adults,” DEA Administrator Anne Milgram said in the DEA’s August 30 warning.

“The men and women of the DEA are relentlessly working to stop the trafficking of rainbow fentanyl and defeat the Mexican drug cartels that are responsible for the vast majority of the fentanyl that is being trafficked in the United States.”

The DEA’s warning followed announcements by Customs and Border Protection of having seized large caches of the pills.

Other law enforcement warnings have followed, and now even colleges like Penn State University warning students about it.

There’s no doubt that there really have been seizures of multi-colored fentanyl pills in different parts of the country. However, skepticism has been raised about other aspects of the phenomenon, especially the part about children being targeted. Also worth considering is that while most of the pills in photographs released by law enforcement are multicolored, none of them really resemble the colors of the rainbow.

“New crime panic just dropped,” libertarian writer Elizabeth Nolan Brown said on Twitter in reaction to the DEA report. “Nothing about it makes sense. (Who thinks drug cartels want to addict small children? How would that even work? If a kid did take it thinking it was candy, how would they get more? Who thinks young people are only not doing drugs b/c the pills aren't colorful enough? Etc Etc).”

The Washington Post reported separately on one of the rainbow fentanyl seizures in Portland, two weeks before the DEA release, in which an officer speculated that the colorful drugs have proliferated because dealers “say that this is kind of what people want.” That officer also expressed worry that the drugs could end up in the hands of kids.

A recent Vice News report also pointed out that the change in colors of the drugs is more a marketing choice by drug dealers than anything else.

Salon has also expressed skepticism. Dr. Nabarun Dasgupta, a pharmaceutical scientist at the University of Carolina at Chapel Hill, described the DEA’s announcement to that publication as “typical drug war bulls**t.”

Dasgupta stated that non-traditionally colored versions of drugs are nothing new. And he added that the DEA’s warning "was so divorced from any reality of what drug markets are actually like, it was almost laughable that our country's top drug enforcement folks are so out of touch with what's happening on the ground.”

Claire Zagorski, a licensed paramedic, program coordinator, and harm reduction instructor for the PhARM Program at The University of Texas at Austin College of Pharmacy, also chided the DEA.

“Why would someone give away their expensive drugs to some random person they don't know, just so they might have a bad experience? It doesn't make sense,” she told Salon.

But that hasn’t stopped the rhetoric about the issue from getting more and more bizarre.

Per the Post, a former DEA official named Derek Maltz appeared in August on Tucker Carlson’s Fox News show to offer an alternative explanation for rainbow fentanyl: “Behind the scenes… you have the Chinese Communist Party that are looking to destabilize this country by killing the kids. It’s that simple.”

Then, this week, the chair of the Republican National Committee, Ronna McDaniel, appeared on Fox News and made some truly strange comments about rainbow fentanyl.

“Just last month, 2,000 pounds of fentanyl came across our border, that could kill 500 million people,” McDaniel said in the interview. “Every mom in the country is worried, what if this gets into my kid’s Halloween basket? The rainbow fentanyl. What if my teenager gets this.”

Once again, there are zero reasons to think that anyone would give away drugs to children for free on Halloween. Drugs being deliberately mixed with Halloween candy to harm kids  is a longstanding urban legend, one very light on actual real-world examples.

McDaniel, in the same interview, told another anecdote.

“You saw [House Minority Leader] Kevin McCarthy tell the story last week of a 13-year-old that showed up at school w/those candy-looking fentanyl pills & it killed an official just by opening it.”

There was a case in California this month in which a thirteen-year-old student was arrested with fentanyl pills, but they were described in one news account as “disguised as Percocet,” with no reference to “candy-looking” or “rainbow fentanyl.” As for the official, Fox 10 reported that a school supervisor “opened the pill bottle to check it and was exposed due to them being an ‘inhalation hazard.’” However, contra McDaniel, he was not killed, and was reported in stable condition as of last week.

An Associated Press fact check last year found that “you’re highly unlikely to OD on fentanyl just by being near the drug.” There have since been a few stories of first responders claiming to have suffered overdoses after touching fentanyl with their hands, but experts caution that such a thing is unlikely—though not impossible.

Fentanyl is surely a very dangerous drug that has cost many people their lives. However, all indications are that “rainbow fentanyl” is more of a branding strategy by drug dealers—one which doesn’t appear to be new—than any type of geopolitical conspiracy. There doesn’t appear to be any indication that multicolored fentanyl is any more dangerous than regular fentanyl.

And while you should certainly talk to your kids about the dangers of drug addiction and Fetanyl, in particular, your concerns should not center on your children’s Halloween candy this October.