No Dynasty for China: How Mao's Son Was Killed in the Korea War 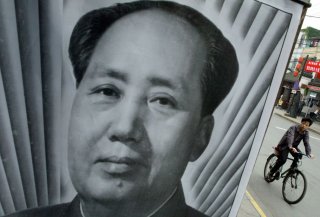 War has brought a premature end to countless promising young lives in absurd and horrifying ways. This is the tale of how the death of one man accorded high honor by North Korea may have changed the fate of China.

Gen. Yang Di thought there was something strange about Gen. Peng Dehuai’s new secretary. The junior officer—in fact, merely a Russian translator—kept on speaking out in the midst of staff meetings and even dared to lecture Gen. Liang Xingchu, commander of the 38th Army Corps, on his tactics.

He did so without being reprimanded by Peng, commander of the Chinese People’s Volunteer Army in Korea. When the high-ranking Peng tried cheating at Chinese checkers by taking back bad moves—an infamous habit of his—the translator even had the gall to chew him out for it.

Yang complained to his boss, Gen. Ding Ganru, about the young man’s behavior. Ding told him to drop the matter. Only later—much too late in fact—did Yang realize the truth. The secretary was Mao Anying, Chairman Mao’s son, and the man quite possibly bound to be the future ruler of China.

The story of Mao Anying begins with his mother Yang Kaihui, the daughter of a leftist intellectual. Yang’s dad helped Mao Zedong, a fellow native of Hunan province, get a job as an assistant librarian in Beijing early in his career. Mao became quite taken with Kaihui’s looks and political zeal. They married in 1920 and formed a household in Changsha for several years. She was the second of his four wives—the first wife having died young after they were both forcibly married against their will.

Yang gave birth to three sons—Anying, Anqing and Anlong—and remained active in the communist movement even after Mao’s military and romantic activities took him far afield—to the point that Zedong married his third wife, the guerrilla sharpshooter He Zizhen, while still with Kaihui.

In 1930, after a communist defeat in Changsha, nationalist warlord He Jian arrested Kaihui. Refusing to inform on her ex-husband or repudiate his cause, Kaihui was shot in front of her two older sons. Her offspring were spirited away first to a rough life as urchins on the streets of Shanghai, where Anlong died of dysentery and a policeman beat Anqing, possibly leading to his lifelong mental illness.

The communists finally sent the surviving brothers to the Soviet Union in 1936. Educated in the Interdom boarding school with the children of other international communists, Anying acquired the Russian name Sergei Yun Fu and became a fluent Russian speaker. Their stepmother Zizhen joined them there; after being wounded in battle, she was exiled to a Russia asylum for medical treatment to clear the way for Mao to marry his fourth and final wife, Qing Jiang.

After studying at the Frunze military academy in Moscow, Anying petitioned Stalin for permission to fight for the Red Army in World War II. He then served in in an artillery regiment of the First Belorussian Front, which saw action in Poland and the Czech Republic.

In January 1946, Mao Zedong had Anying fly back to Yan’an, China, worried that his son had become more Russian than Chinese. The junior Mao was headstrong and critical of his father’s growing cult of personality. His father put him to work shoveling manure in local agricultural projects and later in a factory. The relatively menial labor didn’t prevent his marriage in 1949 to Liu Songlin, who had also lost a parent in the war with the nationalists.

Mao consolidated his control over China in 1949—and turned his eye to the divided Koreas. The United States had supported the nationalists, and Mao was eager to remove what he saw as a potential American springboard for a counterattack in South Korea.

Though he helped sponsor North Korea’s June 1950 invasion of South Korea, brokered with a gift of Soviet tanks and heavy weapons, the scheme backfired badly—the United Nations counter offensive threatened not only to bring an end to North Korea, but seemed like it might roll over the Yalu River into China.

Though this was not the intent of the U.S. Pres. Harry Truman, it was an idea advocated by Gen. Douglas MacArthur, commander of U.S. forces in Korea.

As a result, Mao committed a massive “volunteer” army under Gen. Peng Dehuai to salvage the situation. Chinese troops began staging across the border in North Korea by late October 1950, poised to launch an epic winter assault that would roll back United Nations forces 120 miles from the border with China—at the cost of immense casualties due to the reliance on human wave attacks.

Anying insisted on joining the Volunteer Army, wishing to serve in the infantry. However, Peng did not want to get Mao Zedong’s son killed in action, and appointed Anying as a Russian translator under the nom-de-guerre Secretary Liu, serving at his army’s command post. This post, located in Tongchang County on the northeastern border with China, was located inside a gold mine for protection from air attacks. By that time, U.S. air power was so ubiquitous in the theater that communist troops and supply vehicles could only move safely at night.

However, a twin-engine RF-61C Reporter—a photo-reconnaissance version of the P-61 Black Widow night fighter—spied on the command post on the evening of Nov. 24 for several hours. Aware that their location may have been detected, Peng ordered his staff to remain underground the following day, doing their cooking at night so as to avoid making any visible smoke.

The headquarters staff was supposed to report for duty at 4:00 a.m. that morning. However, Anying slept in. Once he got up at 9:00 a.m., Mao’s son wanted breakfast—and he persuaded two of his friends, staff officers Gao Ruixun and Cheng Pu, to cook egg fried rice on the stove in Peng’s office, which was in a building on the surface. The eggs, a rare delicacy in the war zone, had been sent as a special gift to Peng from the North Koreans.

According to Gen. Yang’s memoir, when he noticed smoke rising from the building, he ran over and warned Anying to put out the fire before it attracted hostile attention. Anying’s party told Yang to get lost and that they would put out the fire as soon as they were done cooking.

At 10:00 a.m., four U.S. Air Force B-26 Invader attack planes pounced on the encampment. Mao’s friend Cheng Pu jumped out the window and fled for the protection of the mine, while the son of the communist leader and his other compatriot hid under a bed or table. However, staying inside the smoking building was not the wisest course of action, especially when targeted by napalm bombs.

Most people are familiar with napalm from its use in the Vietnam War. However, the jellied gasoline was already being dropped by U.S. war planes decades earlier during World War II against German and Japanese targets, and saw extensive use in Korea as well.

One of the bombs scored a direct hit on the office building, setting it ablaze. Yang ran into the conflagration, bumping into Cheng Pu, who had survived the attack. Racing inside, he found Anying’s charred remains, identifiable only by the melted remnants of his Soviet-made watch. His body was buried with other Chinese soldiers in a grave at the PVA Martyr’s Cemetery in North Korea.

Peng avoided reporting the death of Mao’s son for two months before finally sending a telegram in January 1951. When Mao received the news, he apparently spent a day brooding and smoking cigarettes, and some claim he ruminated that his family line “was over.”

However, when Peng later presented his official apology in person, Mao’s reply was stoic. “A regular soldier was killed. Do not make special event of it just because it was my son.” Later he would also say regarding Anying’s passing

The above account is the story told by Gen. Yang Di in his memoir published by the People’s Liberation Army—one supported up by an interview given by Gen. Ding in 1985, as well as several other Chinese officers present at the command post. However, there are several competing versions of the story.

One variant claims that P-51 Mustangs from the 18th Fighter Bomber Wing of the South African Air Force killed Anying. Supposedly the pilots were two Polish officers, Lipowsky and Theron, flying out of Pyongyang. However, while the SAAF did make frequent use of napalm in Korea, a single-engine P-51 would be difficult to confuse with a larger, twin-engine B-26.

“Without sacrifice there will be no victory.”

Though the egg fried rice story is well known in China, it is not embraced by everyone. Cheng Pu, the lone survivor from the fateful breakfast maintained in an interview that this detail is false and that there would not have been any eggs available on the battlefront. Another Chinese writer, Cheng Xi, held forth on CCTV that Mao Anying was actually baking an apple peel. Still another historian, Yuan Jiang, claims Anying was actually warming up frozen bread and porridge.