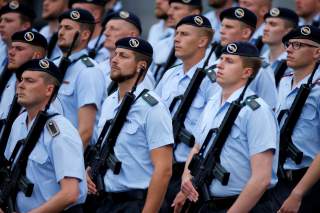 One of the paradoxes of transatlantic relations is that successive US governments have consistently encouraged Europeans to do more in the area of defense and security, for good reasons. Yet, whenever Europeans unveiled initiatives aimed at doing that, they were met with hand-wringing and criticisms from America and from prominent Atlanticists: Won’t new EU structures duplicate those existing within NATO and jeopardize interoperability? And is a Europe that is genuinely autonomous in defense in the US interest?

Such concerns are not relieved by casual declarations from European leaders such as Emmanuel Macron and Angela Merkel that the alliance is “brain dead,” and that Europe can no longer “fully rely” on the United States for its security. According to a new, practically minded report from Carnegie’s Erik Brattberg and Tomáš Valášek, it is time to turn the volume down:

The criticisms of new initiatives such as PESCO and EDF are at their most compelling when they point to their potential as tools of European protectionism. Non-EU countries and suppliers might be prevented from participating in many of the new EU projects. In the greater scheme of things, it is a relatively minor point that the alliance ought to be in a position to address through trade and regulatory concessions. Neither is the problem of technical interoperability insurmountable — rather, both are questions of good will on both sides of the Atlantic.

The Carnegie report, which is worth reading in its entirety, makes recommendations both to US and European policymakers. Americans should steer away from their usual knee-jerk reactions to European defense and security cooperation, which are often based on an ideologically driven distrust of the European project. Europeans, in contrast, should avoid polarizing terminology and rhetoric that pits the continent against the United States and seek to reframe Europe’s strategic autonomy as its contribution to the transatlantic alliance, not as a sign of its demise. The European debate should be practical, not aspirational, focused on questions of capabilities and effectiveness — and for obvious reasons, the United Kingdom should be kept as closely as possible to any European initiatives.

Moving beyond the report itself, any build-up of Europe’s defense capabilities cannot be conducted separately from a broader discussion of the nature of threats that the West is currently facing — which go far beyond conventional forms of warfare and encompass phenomena such as disinformation campaigns and efforts to use dirty money to directly or indirectly co-opt Western political elites. At a time of major disagreements between the EU and the United States, cracking down on illicit financial flows into our banking and financial systems from kleptocratic regimes, for example, could provide an important uniting point for policymakers in the United States and in Europe who are seeking to defend liberal democracies. The earlier the EU and the United States start focusing on such constructive agenda, the better the prospects of the alliance in the 21st century.

This article by Dalibor Rohac first appeared in 2019 on the AEI Ideas blog.