No Glory for Hate Act: An Unconstitutional Tantrum 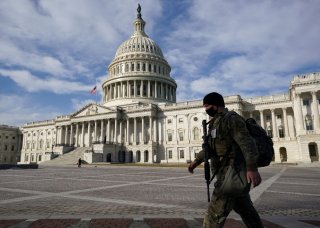 But they’ve now fallen into the trap of letting their anger get the better of their reason and their oaths to uphold the Constitution. The result is a legislative temper tantrum in a bill dubbed the “No Glory for Hate Act.”

The act is petty and petulant, and it inspires a strong temptation to laugh and mock. It is, however, an unconstitutional abuse of power, and that transforms an amusing little fit into a worrisome precedent.

The bill targets “any former President that has been twice impeached”—excuse me while I take a moment to figure out all the presidents that it applies to—and says that no federal funds may be used to commemorate all those presidents.

It also prohibits any federal buildings, lands, streets, or other properties from bearing the name of those presidents. Likewise, it bars federal funds from going to any entity that will spend them “for the benefit of” any property that bears the name of any of those former presidents (of whom I’m sure there are many).

Ironically, the bill fails to include an exception to the naming provision for outhouses, privies, latrines, water closets, or hazardous waste disposal sites. If you’re going to be petty, I ask only that you be clever about it.

The tantrum continues. All of those twice-impeached presidents will have their pensions and all other federal benefits taken away except Secret Service protection. Likewise, none of them may be buried in Arlington National Cemetery (I’m sure that will save a lot of space there).

The bill calls to mind a child throwing a public fit. Unlike a grumpy child exercising his First Amendment right to free speech, however, the bill manages to violate the Constitution in two ways.

First, it violates the Punishment for Impeachment Clause, which, as the name suggests, specifies the punishments that may be doled out when someone gets impeached. It says “Judgment in cases of impeachment shall not extend further than to removal from office, and disqualification to hold and enjoy any office of honor, trust or profit under the United States.”

If you noticed the phrase “shall not extend further,” you’re doing better than House Democrats who either missed it or have a different copy of the Constitution than you and I do. No matter how hard I stare at that comma between “removal from office” and “disqualification,” I simply cannot find “shall have his name barred from all federal properties, his benefits revoked, and his plot at Arlington taken away.”

The bill also misses the requirement that a president be found guilty by the Senate before he can be punished. Judgement follows conviction.

The No Glory for Hate Act also runs into trouble with the Bill of Attainder Clause. That clause says “No bill of attainder . . . shall be passed.” A bill of attainder, as the Supreme Court explained in United States v. Brown (1965), is a “legislative punishment, of any form or severity, of specifically designated persons or groups.” In that case, the Court struck down a law that barred Communist Party members from serving as leaders in labor organizations. In other cases, the Supreme Court has struck down a law that stopped salaries for people dubbed “subversives,” and a law that barred people from practicing law in federal courts if they had given “encouragement” to the Confederacy.

Arguably the Supreme Court’s inclusion of civil penalties within the ambit of bills of attainder is incorrect—historically only laws imposing death or imprisonment counted—but we apply the law we’ve got.

The law we’ve got says that legislation is a bill of attainder if three conditions are satisfied: (1) it targets specific people or a group of people; (2) it includes punishment; and (3) it lacks a judicial trial.

In President Richard Nixon’s case, Nixon v. Administrator of General Services (1977), the Supreme Court held that the second requirement was missing from a law that ordered the Administrator of General Services to take custody of President Nixon’s papers and tape recordings. That law was not “designed to inflict punishment” but rather served the legitimate purpose of “guarantee[ing] the availability of evidence for use at criminal trials.”

In President Trump’s case, or rather, the case of all twice-impeached presidents, all three elements are satisfied. This bill targets a group of affected persons: all those surely numerous presidents who have been twice impeached. It includes punishment: loss of federal pension and other benefits. And it lacks a judicial trial: those presidents are punished as soon as a majority of the House votes twice to impeach them.

Look, we all get angry when we fail. And we innately understand the temptation to use what power we have to punish our political foes. Giving in to that temptation, however, is bad governance, and it sets a precedent that cuts both ways.

No matter how angry you get about the current state of politics, it’s just not acceptable to torch the Constitution. Especially if you’ve taken an oath to uphold it.

GianCarlo Canaparo is a legal fellow in The Heritage Foundation’s Edwin Meese III Center for Legal and Judicial Studies.