No Masking It: Coronavirus Has Infected China's Economy 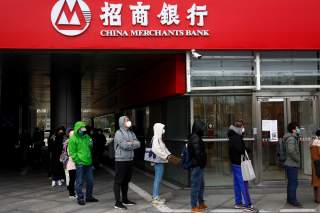 There is no telling how severe and widespread the Covid-19 pandemic will get. Other, similar experiences – SARS in 2002, killer influenza in 2009, and the MERS affliction in 2012 – ran their course faster than was generally feared when they first appeared, allowing markets and economies to recover quickly. Tempting as it is to use these as a model with which to forecast today’s troubles, the best they can do is hint at future developments. This virus could be entirely different. The longer it lingers and the more it kills, the worse the economic impact will get. Without even considering a future of pain or relief, Covid-19 has already imposed severe burdens on the world economy.

This disease started in China and this is where the economic burdens have fallen hardest. Setbacks, however, are hardly exclusive to that country.  Indeed, economic troubles from the Covid-19 virus have spread to the rest of the world faster than the virus has. Through a number or sometimes-obscure paths, shortfalls in the Chinese economy have imposed economic damage elsewhere in Asia, in Europe, and in North America.  Exports to China have fallen everywhere while China’s economic shortfall has interrupted supply flows so that firms seemingly divorced from China trade have had difficulties meeting production schedules. The current quarter could see an outright recession in several economies, including China’s but not only there.

The economic picture in the Middle Kingdom is far from pretty. The quarantines imposed by Beijing and the fears workers have about traveling where they may be infected have shut down a good portion of that nation’s production. The respected Caixin/Markit Manufacturing Purchasing Managers’ Index fell more than 20 percent in February from a level of 51.1 to 40.3. (A level of 50 marks the line between increase and decline.) The index for manufacturing alone fell in February to an all-time low of 35.7. The suddenness of this drop points to the Covid-19 virus alone as the cause. Along with this bad news, businesses report an 8 percent drop in Chines auto sales from a year ago and a 7 percent drop in mobile phone purchases. Intercity passenger traffic is estimated to have dropped by 40 percent. A recent survey by the Chinese Academy of Social Science (CASS) reports that just under half of Chinese businesses expect a loss this year.

Because of the dubious nature of official statistics in China, it is difficult to get a definite fix on the overall damage. Some sources point to a 10 percent year-on-year real decline in Chinese economic activity in the first quarter of 2020. That figure might include a measure of hyperbole, but it is not hard to anticipate an outright economic decline, something China has not experienced in decades. China’s economy, after all, was weak going into this emergency. Official statistics, always on the optimistic side, put last years’ real growth at 6.1 percent, fast by most nation’s standards, but slower than China’s economy has grown in 30 years. That is quite a concession for the official statistics mill. Anecdotal evidence suggests something still less robust. Some China experts to put the country’s actual real growth rate at closer to 3-3.5 percent. On the basis of this figure, it is easy to anticipate a real economic decline in response to the pressure of this virus. Consider that Hubei province, where the disease started, remains shut down. Since it accounts for some 4 percent of China’s gross domestic product (GDP), its loss alone could put the economy into recession. Even accepting the official growth figure for last year, the loss of Hubei would give China a growth rate slower than the United States experienced last year. And as the figures quoted above make clear, China’s economic burdens extend well beyond Hubei.

Those burdens also go well beyond China’s borders.  Most visible and easiest to track is tourism. The once-great flow of Chinese tourists to America, Europe, and elsewhere in Asia has all but dried up – because Beijing will not let them go and other nations, afraid of contagion, do not welcome them. The economic loss is far from insignificant. Last year Chinese tourism in the United States, already impeded by the trade war raging at the time, still added some $20.1 billion to this country’s economy. Though a relatively small 0.1 percent of America’s GDP, this flow has now completely disappeared during this first quarter of 2020.  Other countries have suffered considerably more. Chinese tourism typically counts for some 0.5 percent of the GDP of the European Union (EU) including the U.K., 0.8 percent of Japan’s, and a whopping 1.0 percent of South Korea’s. These flow, too, have completely dried up. Alone, this loss is enough to drive slower-growing economies into decline.

Nor does the pain stop with tourism. China, after all, accounts for one-third of all world trade. It absorbs 24 percent of South Korea’s exports, aside from tourism, mostly electronics, machinery, and chemicals.  At least it did before these economic troubles began. Some 20 percent of Japan’s exports typically go to China and a comparable portion of exports from the EU (including the U.K.), Vietnam, and Canada.  China has provided a destination for only some 8 percent of U.S. exports, which though a smaller level of dependence on that market than other counties is still significant. The loss of this business or a good portion of it could easily bring down some of these economies in this first quarter of the year.  Even the United States, which grew in real terms at about 2.0 percent last year, has only a thin cushion to absorb the lost export sales. South Korea also grew some 2.0 percent, but it stands to lose three times the relative sales from the loss of exports to China.  Meanwhile, the EU grew a mere 1.5 percent in real terms and Japan an even slower 1.0 percent, suggesting that the export shortfall on top of tourism losses could easily create a negative real growth figure for the current quarter.

The accumulation of economic hardship goes further still. Because producers the world over source materials and parts everywhere, China’s nightmare has also interrupted supply chains everywhere and so stymied production across the globe. According to statistics available from the Organization for Economic Cooperation and Development (OECD), Europe typically sources some 10-15 percent of its production inputs from China and Canada a similar percentage. Russia and India look more vulnerable, typically importing some 20-25 percent of their materials and parts from China. On this scale, the United States looks most vulnerable. Last year, this country’s producers imported more than 25 percent of their materials and parts from China.

The few current statistics available give a sense of the extent of this disruption. The port of Long Beach, California, a major entry for Chinese goods, reports a 40 percent decline in container traffic. Observers in China note that containers sit unmoved on the docks at the important ports of Tainjin and Ningbo. Chinese ports generally warn of a four-month delay in moving containers to the United States. The United Auto Workers union recently suggested that a shortage of Chinese parts will soon close General Motor’s plants. Pharmaceutical firms indicate that the lack of Chinese ingredients will affect 150 prescription drugs.  Apple waits on Taiwan’s Foxconn because it cannot assemble enough workers at its mainland factories. The Group of 20 (G-20) major trading nations summarize all these effects, concluding that the Covid-19 virus will cost the global economy some $1.0 trillion in annualized production in this quarter alone.

These are the immediate burdens of this coronavirus. The current quarter cannot avoid them. If the disease dissipates relatively quickly, as did SARS and MERS, economies, and the financial markets that reflect them, will no doubt rebound. The spring quarter would look better and global economies would return to their previous growth tracks by the final quarter of the year. China is counting heavily on this view of the future.  It needs a quick rebound – to save itself from a recession, to be sure, but also because last year's trade war among other things had started a global diversification away from sourcing in the Chinese economy, something today’s troubles are accelerating. To ensure that China can respond immediately to any rebound, Beijing has already reduced taxes on small businesses and instructed its three state-run banks to increase lending and at a special low rate to small businesses. If the virus begins to dissipate, such gestures might help accelerate the rebound China needs and stem some of the sourcing diversification that Beijing fears, but it cannot foster a rebound if the medical emergency persists.

None of Beijing’s efforts will matter if the Covid-19 virus lingers. In that case, the economic setbacks already occurring will redouble. No doubt the Federal Reserve (FED) and the European Central Bank (ECB) will cut rates and flood markets with liquidity in an effort to offset the economic setbacks implicit in the situation. The Fed has all but promised. But monetary policy has shown itself to be less powerful than it once was in promoting economic growth. It will likely prove even less effective in the face of the supply-deprived constraints associated with this situation. That leaves a bleak economic picture should this emergency persist, for the world economy and especially for China.