No More Aircraft Carrier for Russia? It Might Not Be a Bad Idea. 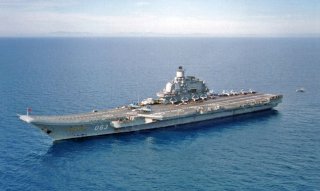