No More American Nukes in Europe? The New Arms Race May Cause Major Headaches 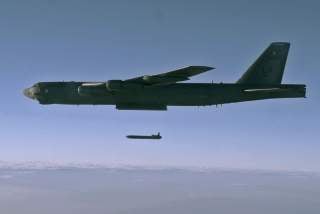 Key point: Europeans have wavered before on hosting U.S. nuclear weapons, but they are now wavering again as they find themselves between two opposing great powers.

As the rivalry between the United States and Russia shows no sign of abating, a number of different elements of the strategic arms stability framework have come under significant stress. Several key treaties, including the Anti-Ballistic Missile Treaty and the Intermediate-Range Nuclear Forces (INF) Treaty, have even broken down. At the same time, Washington and Moscow are doing their best to maintain or improve their nuclear posture in order to maintain a credible deterrent.

This renewed focus on nuclear arms capabilities is also affecting one of the less overt elements of the U.S. nuclear force. While initially a secret agreement, it is now common knowledge that the United States stores tactical nuclear weapons in several European countries under what is known as "nuclear sharing." Currently, Germany, Italy, the Netherlands, Belgium and Turkey host U.S. tactical nuclear weapons on their soil. But this practice, which helped the United States improve and extend its nuclear umbrella over Europe during the Cold War, is increasingly coming under scrutiny.

The Evolution of Nuclear Sharing

Initially, nuclear sharing agreements were (secretly) reached with several European NATO allies with very specific goals in mind. One of the most obvious advantages of forward-deploying air-delivered nuclear weapons was that such weapons could be deployed faster in case the Cold War turned hot. In fact, the air forces of the countries hosting them were even trained and certified to deliver the nuclear warheads with their own aircraft, though they still required U.S. approval to activate the devices.

In what sounds counterintuitive at first glance, the United States also saw nuclear sharing as a way to actively support nonproliferation. The idea was that by providing certain allies access to U.S. nuclear weapons, it would discourage them from seeking their own nuclear capabilities. The nuclear sharing agreement itself is not considered a breach of the Nuclear Nonproliferation Treaty because technically the arms are still under U.S. control, guarded by U.S. personnel, and would only be released to allies once nuclear war has been initiated and the value of the nonproliferation treaty becomes negligible.

At the time, overseas nuclear basing also included much more potent weapons than the current air-delivered nuclear bombs. The United States deployed a significant number of nuclear-armed intermediate-range ballistic missiles and cruise missiles to Europe during the Cold War. This precluded the INF Treaty, which came into existence in 1987 and effectively led to the withdrawal and dismantling of these missiles abroad. The nuclear sharing agreement survived the treaty, however, and to this day the United States maintains nuclear weapons in Europe as well as several wings of U.S. strike aircraft capable of deploying them, alongside allied air forces trained and certified to do the same if needed.

Looking back at that evolution, the demise of the INF Treaty — or at least its suspension until the expected official cancellation in August — would typically indicate a renewed potential for U.S. nuclear armaments to be stationed in Europe. Yet Washington and Brussels have already rejected the intent to base nuclear-armed missiles in Europe again. In fact, many on either side of the Atlantic have gone a step further and even started to question the validity of the nuclear sharing agreement as a whole. The mere possibility of U.S. nuclear missiles in Europe has awoken concerns over Europe's position relative to the broader nuclear competition between the United States and Russia. An increasing number of voices in hosting countries — including from members of governing parties — are questioning the necessity to entertain U.S. nuclear arms. Some have even gone as far as to propose a European nuclear deterrent independent of the United States.

This debate already spiked several years back when the United States announced that it would be modernizing its air-delivered nuclear weapons, including those located in Europe. The modernization plans went ahead and, so far, the European hosts have committed to their continued nuclear role under the sharing agreement. But since then the nuclear competition between Russia and the United States has only intensified, and the modernization plans are likely to drive the debate on the European side. Therefore, the future of the nuclear sharing agreement under its current form is not necessarily guaranteed.

One of the particularly pressing questions is that of the role of Turkey. Despite the deterioration of relations between Washington and Ankara since the 2016 coup attempt in Turkey, the country continues to host U.S. nuclear weapons. During the Cold War, having these weapons in Turkey was valid because of its proximity to Russia and its position on the southern flank of the Eastern European Warsaw Pact members. Today, it is less clear that Turkey would be so ready to assist the United States in a nuclear conflict with Russia. The escalation between the United States and Turkey over the latter's plans to acquire S-400 air defense systems from Russia — and its consequential suspension from the F-35 fighter aircraft program — cast doubt on just how close an ally Turkey will remain despite its continued status as a NATO member.

From the perspective of the United States, Turkey has also become one of the less actively involved nations in the nuclear sharing pact. Unlike the other countries hosting U.S. nukes, Turkey allegedly no longer trains or certifies its pilots to deliver such weapons in case of conflict for budgetary reasons. While it is the only country engaged in nuclear sharing that doesn't have the indigenous capability to deploy nuclear weapons, the United States hasn't permanently deployed a nuclear-capable fighter wing at Incirlik — the Turkish base that hosts nuclear weapons - for decades. This means that in the event of a nuclear war, the United States would have to redeploy aircraft to Turkey to make use of these weapons, or the bombs themselves would have to be rapidly redistributed to other airfields housing capable aircraft and crews. As such, the lesser relevance of Turkey as a nuclear sharing partner, and the expectation of several significant hurdles in the near future — ranging from the future of the F-35 program to the modernization of U.S. nuclear devices located in Turkey — singles out Ankara as a potentially fragile component of Washington's nuclear sharing posture.

Overall, the nuclear sharing agreement has become subject to much larger geopolitical evolutions, such as the increased great power competition between the United States and Russia as well as European concerns over the Continent's position relative to the classic East vs. West rivalry. While most of the focus on strategic weapons stability is reserved for arms control treaties and technological developments, the Cold War legacy of nuclear sharing still represents a notable component of the NATO strategic deterrent. In Europe, such agreements are not only perceived as a token of U.S. security but also as a potential risk as Europe increasingly finds itself caught between Washington and Moscow — and without any significant ability to assert itself independently from the United States or NATO.

U.S. Nuclear Weapons Sharing Coming Under Increased European Scrutiny is republished with the permission of Stratfor Worldview, a geopolitical intelligence and advisory firm.