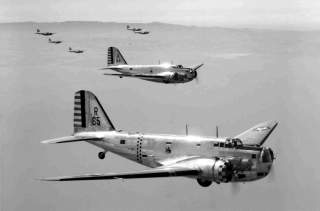 The rescue team slashed through eight miles of marshy thicket on their way to the crash site. Two days before on Feb. 15, 1941, the USAAF B-18 Bolo bomber — serial number 36-446 — carrying five crew and two passengers suffered a left-engine failure and went down in thick clouds into the remote, mountainous jungle on Hawaii’s Big Island.

Thankfully, all seven men survived. The U.S. military located them and dropped supplies before the rescue party hacked their way to the wreckage. One passenger was injured, and all made it out of the jungle the next day.

The bomber sat in the jungle, its weapons, radios and bomb sight stabilizer quickly retrieved following the crash — with many other parts to disappear into unknown hands in the decades to follow. As of May 2017, it was still there in a near-impassable gulch in the Big Island’s Kohala swamps; as one of only six Bolos to still exist in the world, and one of only two standard B-18s anywhere.

For the twin-engine Bolo was an unloved bomber.

It wasn’t at first. Introduced in 1936 and designed by the Douglas Aircraft Company, the B-18 — closely resembling a passenger plane as it was based on the DC-2 — was to become a central component of American air power at the time, outcompeting Boeing’s more-expensive B-17 (one of which crashed during development) and replacing the innovative but aging Martin B-10.

Compared to the B-10, the B-18 featured greater takeoff weight, twice the bomb load at 4,400 pounds, twice the crew — but shorter range. A shark-nosed version, the B-18A, had better engines and a forward-mounted bombardier station. The B-18A would comprise 217 of the 350 Bolos produced in total.

For self-defensive armament, the Bolo had nose-, ventral- and dorsal-mounted .30-caliber machine guns.

Nonetheless, the fact that the Bolo was underpowered for modern war was obvious before Japan’s attack on Pearl Harbor on the morning of Dec. 7, 1941. Prototypes of what would become the B-17 Flying Fortress, which the U.S. military experimented with in the 1930s, were so superior to the Bolo in every conceivable way, the U.S. Army Air Corps overcame Depression-era budget resistance and put them in production.

It was perhaps the U.S. military’s continued — albeit partial — reliance on the B-18 which saved B-17s from further destruction on the ground by Japanese air attack in the opening hours of the war. In Hawaii, the USAAF suffered 12 Bolos destroyed for 33 based there in total, but only four of 12 B-17s. A further 10 Bolos were damaged, resulting the effective loss of a third of the Hawaii-based B-18s.

Sources for aircraft losses in The Philippines that month are harder to come by, though the Far East Air Force based there had 18 Bolos. It’s likely the majority was destroyed or captured.

There wasn’t much of a future left for the Bolo except as a transport and reconnaissance aircraft. However, Lt. Gen. Frank Maxwell Andrews of the Caribbean Defense Command, a precursor to U.S. Southern Command, needed aircraft to hunt German U-boats which were slipping past Royal Navy screens in the Atlantic.

With the U.S. Navy focused on the Pacific, Andrews needed to keep the U-boats away from American shipping, and he needed every plane he could get. So he gathered Bolos.

Curiously, Andrews — who was instrumental in forming the USAAF from the Army Air Corps, paving the way for an independent Air Force — had supported the B-17 over the Bolo in the 1930s. He lost that argument.

But having in 1942 secured 122 B-18A Bolos for his submarine-hunting operations, Andrews upgraded them with depth charges, radars and new bombsights suitable for low-altitude hunting, according to a 2013 retrospective by Johannes Allert in Air & Space Power Journal.

As Andrews built up his Caribbean force, U-156, a Type IXC submarine under the command of KptLt. Werner Hartenstein was leaving a trail of destruction in the Atlantic. On Sept, 12, 1942. Hartenstein sank RMS Laconia, a British transport ship carrying 1,800 Italian prisoners. More than 1,600 people aboard the ship died, and Hartenstein’s attempt to rescue survivors resulted in German admiral Karl Dönitz’s “Laconia Order,” which prohibited such rescue attempts in the future.

Six months later, U-156 and Hartenstein sailed into the Caribbean on their fifth patrol. Despite having more than 97,000 tons sunk and a Knight’s Cross — Nazi Germany’s highest award — to his name, this final patrol came up empty. On March 7, an American Bolo bombed U-156, damaging her and creating a fuel slick that gave her away to a U.S. Navy PBY Catalina to depth-charge her the next day near Barbados.

Hartenstein went down with his vessel.

Another Type IXC, U-512 commanded by KptLt. Wolfgang Schultze, sank after a direct hit by a Bolo’s bombs off South America on Oct. 2, 1942. There was one survivor.

Two months after U-156’s sinking, Andrews — then commander of all U.S. forces in Europe — died in a B-24 Liberator crash in Iceland. Joint Base Andrews in Maryland, which houses U.S. presidential aircraft, is named after him. The Bolos served as training and transports in the United States for the rest of the war, having been surpassed by better bombers — and later, unlike Andrews, to be largely forgotten.

This article by Robert Beckhusen originally appeared at War is Boring in 2017.