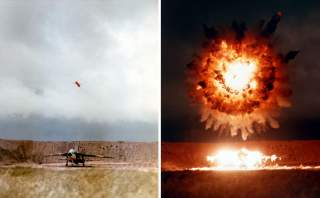 At least initially, the United States will strive to deploy the missiles in areas where it is unlikely to encounter much opposition, such as the U.S. territory of Guam in the western Pacific.

"Sooner rather than later" — that's the United States' desired timeline to deploy conventional land-based intermediate-range missiles in the western Pacific, according to U.S. Defense Secretary Mark Esper. And now that the United States is out of the Intermediate-Range Nuclear Forces (INF) Treaty, there are no treaty clauses — or technical impediments — preventing it from placing missiles in the region to check the rise of China. Such considerations, however, are just half the battle: Facing recalcitrance from regional allies concerned about becoming a target for China and Russia, as well as the latter powers' carrot-and-stick approach to ensure the weapons don't appear near their shores, the United States will find it a far tougher task to actually deploy the weapons in the western Pacific.

The Search for a Host

The United States' decision to pull out of the INF treaty stems in part from China's absence from the treaty, which has allowed Beijing to field a vast and sophisticated arsenal of land-based medium- and intermediate-range missiles. It is thus little surprise that Washington, freed from the INF treaty's restrictions, is now intent on deploying its own land-based missiles in the region to counter China's advantage amid the accelerating great power competition between the two countries.

The first type of missiles the United States wishes to deploy is the land-based variants of existing types such as the BGM-109 Tomahawk and, potentially, JASSM-ER cruise missiles. These types of missiles, however, have a fairly restricted range (the Tomahawk's range is about 1,600 kilometers, or 1,000 miles). Over the longer term, the United States will likely develop a wide variety of purpose-built intermediate-range missiles that have a longer range and are more difficult to intercept.

At least initially, the United States will strive to deploy the missiles in areas where it is unlikely to encounter much opposition, such as the U.S. territory of Guam in the western Pacific. The island is the easiest from a deployment standpoint, but its significant distance from the Chinese coast means the entire country will be beyond the range of the initial types of intermediate-range land-based missiles that the United States will deploy.

While the United States will eventually develop intermediate-range missiles that could reach Chinese targets from Guam, the island is too small to present an existential threat to the East Asian giant. For China, the ultimate goal is to ensure that U.S. missiles remain stuck in a relatively limited geographic area — like Guam — making them easier to target and easier to intercept since Beijing will know the direction of their flight. At the same, the great distance ensures that the missiles must be longer-range, making them more expensive and, accordingly, less numerous. Meanwhile, the United States' other great power rival in the area, Russia, won't be in range of any initial intermediate-range missiles stationed in Guam, although subsequent, longer-range missiles will be able to hit the country's east.

As a result, if the United States wishes to maximize the utility of its missiles, it will have to find somewhere closer to deploy them. And for that, the prime candidates are its main allies in the Asia-Pacific: South Korea, Japan and, potentially, even the Philippines. In convincing Seoul, Tokyo and Manila to host such missiles, however, Washington will have tough political obstacles to overcome. South Korea has already ruled out such an eventuality out, as did Australia — even though Washington didn't even formally approach Canberra on the issue. Tokyo, meanwhile, strenuously opposed Washington's withdrawal from the INF treaty, meaning the United States will struggle to persuade Japan to accept the missiles given the island nation's concerns over Chinese retaliation and strong public opposition. And in the Philippines, the story is much the same — Washington has enjoyed some recent success in convincing Manila to permit a U.S. military expansion in the country, but that is a far cry from persuading the archipelago to welcome the missiles, especially at a time when Chinese-Philippine ties are improving.

The Carrot and the Stick

To ensure that the United States' intermediate-range missiles remain relatively far away in Guam, the Chinese and the Russians will likely pursue a carrot-and-stick approach in their dealings with potential host countries like Japan and South Korea. In terms of coercion, the two giants' primary weapon is to threaten that any country that hosts American intermediate-range missiles would become prime targets for missile strikes. Indeed, Russia has already used such an approach against European countries to discourage them from hosting American ballistic missile defenses. Moreover, Moscow has said it will deploy land-based intermediate-range missiles in its east if the Americans bring them within range of Russian soil. China, meanwhile, could threaten economic retaliation against countries like South Korea and Japan if they accept the U.S. missiles. Such a strategy has failed to dissuade some countries from accepting missiles if they believe they are critical to their own security (as evidenced by European countries that have joined ballistic missile defense systems despite Russia or South Korea's decision to deploy the Terminal High-Altitude Area Defense (THAAD) missile defense system despite China's objections), but Beijing and Moscow's opposition might be enough to ensure their eastern neighbors reject the United States' intermediate-range missiles given that their deployment is primarily a U.S. priority.

At the same time, China and Russia may sweeten the pot to win over regional countries by highlighting the economic benefits of cooperation. China, for instance, is a prime trade partner for nearly all the relevant countries, including Japan, South Korea, the Philippines and Australia. China could even pursue a more restrained approach on hot-button issues like the Senkaku Islands dispute with Japan in an attempt to avoid pushing Tokyo further toward Washington.

Whatever path China and Russia take, both countries will make use of various tools to discourage western Pacific states from accepting a U.S. proposal to base its intermediate-range missiles on their soil — a task that will be all the much easier given that most of these countries are already disinclined to host the U.S. weapons. Thus, unless Washington manages to change minds in capitals like Tokyo, Seoul and Manila, Guam might be as close as it gets to its rivals in terms of intermediate-range missiles.

The U.S. Will Find Few Takers in the Western Pacific for Its Missiles is republished with the permission of Stratfor Worldview, a geopolitical intelligence and advisory firm.