No Test for POTUS: Donald Trump Doesn't Have Coronavirus and Is In 'Excellent Health' 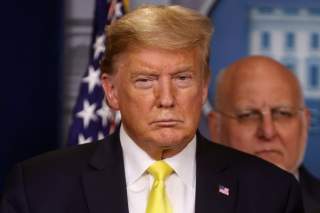 After weeks of effort to downplay the threat of the coronavirus, for both public benefit in the form of market confidence and his own reelection odds, President Donald Trump has come into closer contact with the disease than he probably ever intended.

Last week it was revealed that one of the thousands of attendees at the annual Conservative Political Action Conference (CPAC) was infected with the coronavirus. This anonymous individual, who is currently quarantined in New Jersey, interacted with numerous people, including public officials. Three members of Congress, Senator Ted Cruz of Texas, Rep. Paul Gosar of Arizona, and Rep. Doug Collins of Georgia have chosen to self-quarantine themselves in their homes for the time being. Rep. Louie Gohmert of Texas, despite interacting with the infected individual, has opted not to quarantine himself.

President Trump spoke at the conference on its third day. While he had no interaction with the infected individual, he did have prolonged contact with Matt Schlapp, president of the American Conservative Union, who previously did shake hands and speak with the infected. Schlapp has been in self-quarantine for over ten days and has reported no signs of symptoms. Schlapp has also said that no other CPAC attendees have shown outward signs of being infected.

The administration has not shown public concern about the possible health risk to the president and did not test him for the virus. “The President has not received COVID-19 testing because he has neither had prolonged close contact with any known confirmed COVID-19 patients, nor does he have any symptoms. President Trump remains in excellent health, and his physician will continue to closely monitor him," said Stephanie Grisham, the White House press secretary.

Reporters had previously asked the president Monday evening if he had been tested for coronavirus. He did not respond. Vice President Mike Pence said that he himself had not been tested either; he spoke at CPAC in the days prior to Trump.

There are previous examples in U.S. history of presidents concealing their health concerns from the public. In 1893, President Grover Cleveland told the media he was having two bad teeth removed as a cover story, to conceal that he was traveling to a private yacht to have surgery to remove a cancerous tumor from his mouth. John F. Kennedy suffered from Addison’s disease, a fact he kept secret during the whole of his public career.

There is no evidence the Trump administration is concealing anything at this level, or that the president has the coronavirus.

Earlier this morning the president complimented the performance of his running mate, who he put in charge of coordinating the response to the virus outbreak. “Our CoronaVirus Team has been doing a great job. Even Democrat governors have been VERY complimentary!” Trump tweeted.