No Way: Why Turkey Can't Expect Support From NATO in Syria 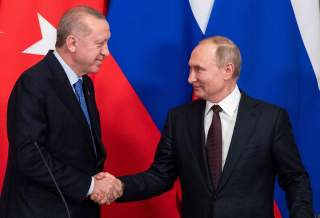 A ceasefire has begun in the Syrian province of Idlib after an agreement was reached between Turkish president Recep Tayyip Erdoğan and his Russian counterpart Vladimir Putin in Moscow on March 5.

While NATO publicly condemned the air strikes by the Russia-backed Assad regime and urged both Russia and Syria to respect international law, Turkey should not expect the alliance to trigger Article 5 – its collective military response mechanism.

Back in October 2019, when Turkey launched an offensive in northern Syria, both the EU and NATO urged Turkey to show restraint and avoid any unilateral action that might lead to further destabilisation of the region.

Nevertheless, the alliance still condemned the late February attack on Turkish troops in Idlib after Turkey invoked Article 4 of the North Atlantic Treaty. Article 4 is a practical demonstration of the alliance’s political dimension – any ally can voice an issue of concern to the council whenever its territorial integrity, political independence or security is threatened.

In its history, NATO countries have used this strong political signalling tool only six times and Turkey initiated five of them. One of these instances was in 2012, after Syrian forces shot down a Turkish fighter jet and Syrian shells killed five Turkish civilians. NATO allies agreed to increase air defence systems to help Turkey protect its population and territory, and expressed strong political support for Ankara. Yet, they didn’t discuss the possible activation of Article 5 – under which an armed attack against one ally shall be considered an attack against them all.

NATO’s reaction to the recent attack was similar to 2012: as well as expressing a strong political support to Ankara, the allies agreed to increase Turkey’s air defence systems to help Turkey protect its population and territory.

This builds on support NATO has been giving Turkey since 2015 to improve air surveillance, enhance its maritime presence and increase information sharing among allies. In recent years, Turkey has also received more than US$5 billion (£3.8 billion) from NATO to improve its military facilities.

NATO has activated Article 5 only once in its 71-year history – in reaction to the 9/11 terrorist attacks. Any invocation of Article 5 requires consensus of all 29 nations. Its geographic application is limited by Article 6, which sets out where an armed attack would need to take place to trigger Article 5. Among other areas, it defines Article 5’s ambit as including the territory of Turkey and the forces, vessels and aircraft of NATO members located in the Mediterranean Sea. But it crucially doesn’t cover attacks on Turkish forces on Syrian territory.

This means Turkey cannot invoke Article 5 on the basis of the escalation in Idlib. Only if Turkey were to be attacked on its territory from within Syria, or if Turkish forces were attacked in or over the Mediterranean Sea could Turkey invoke Article 5.

The right to self-defence under UN Charter Article 51 only exists where an unlawful armed attack takes place, not for the lawful exercise of self-defence through armed force by an opponent. As NATO’s Article 5 is based on this right, it doesn’t apply to all cases of loss of life in combat. Even if the geographical limit did not exist, if Turkish soldiers died as result of a lawful use of force in self-defence by the Syrian armed forces, Article 5 could not be used to request support.

In the past few years NATO’s cohesion has been weakened, partly because of a lack of trust between Turkey and the rest of the alliance and increasing strategic divergences among the allies. This has left NATO countries unable to effectively the address escalations in the Syrian conflict in a coherent way.

The strained relations between Turkey and the rest of the allies date back to a failed coup against Erdoğan’s government in 2016, since when Turkey has moved away from democratic values.

Turkey cannot hope for direct military support from the US either. Although Turkey has requested a no-fly zone in northern Syria, something also suggested by some US senators, this is not being seriously discussed in the US or NATO circles, as it would risk confrontations with Russian air forces.

Washington is yet to formally respond to Turkey’s request for the US to deploy its Patriot missile batteries on Turkey’s southern borders, a request backed by the US special representative for Syria.

This kind of American military assistance would be quite paradoxical, since Turkey purchased a Russian S-400 air defence system in 2017. The Russian system is not only incompatible with NATO defence systems, but is also a potential threat to the US-led, multinational fifth-generation fighter jet program, which Turkey was forced to leave.

The discussion surrounding Turkey’s involvement in Syria and its potential for escalation shows the challenges for NATO. While the current situation cannot trigger Article 5, despite these challenges NATO allies will continue to provide support to Turkey within the framework of Article 4. In fact, the possibility of such Article 4 consultations might allow for NATO to support Turkey without provoking escalation by triggering a collective military response – which would bolster the case for the continued relevance of the alliance.