No, Wealth Inequality Has Not Ruined American Democracy 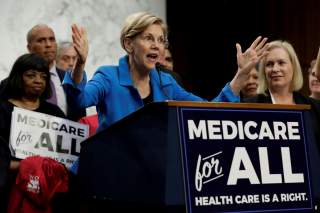 Key point: Income inequality may cause many to get angry, but it has not drastically shifted American democracy.

“Billionaires have seized our government,” Senator Elizabeth Warren claimed earlier this year. This idea, that the rise in wealth inequality has led to the capture of politics by super wealthy elites, is fast becoming conventional wisdom on the left of politics and used as justification for wealth taxes.

Paul Krugman has asked, for example, “Can anyone seriously deny that our political system is being warped by the influence of big money, and that the warping is getting worse as the wealth of a few grows ever larger?”

Former lead economist at the World Bank, Branko Milanović, has claimed “In every political system, even a democracy, the rich tend to hold more political power. The danger is that this political power will be used to promote policies that further cement the economic power of the rich. The higher the inequality, the more likely we are to move away from democracy toward plutocracy.”

Warren’s wealth tax architects, economists Emmanuel Saez and Gabriel Zucman, have said that their tax was designed not to raise revenue or improve economic efficiency, but to prevent this ongoing “oligarchic drift that, if left unaddressed, will continue undermining the social compact and risk killing democracy.”

So which millionaires and billionaires have captured the US’s democracy as wealth inequality has risen? Liberal billionaires, such as George Soros and Tom Steyer, perhaps? Or maybe conservative and libertarian billionaires, such as Sheldon Adelson and Charles Koch? The point I make here is an important one: there is no homogenous political view among the wealthy; just as Martin Gilens found among the income rich “the affluent are no more (or less) likely to be of one mind” than the middle-classes or the poor.

This is unsurprising. Look at Congress itself. Roll Call’s analysis shows that of the ten wealthiest members, five are Republicans and five are Democrats. Analysis below uses the “nominate scores” method to map apparent support for redistribution across those members with positive net worth from roll calls during the 111th–115th congresses. As you can see, there’s no relationship between wealth and support for redistribution overall. Party allegiance is much more important. There is little class-consciousness among the wealthy on the Capitol. 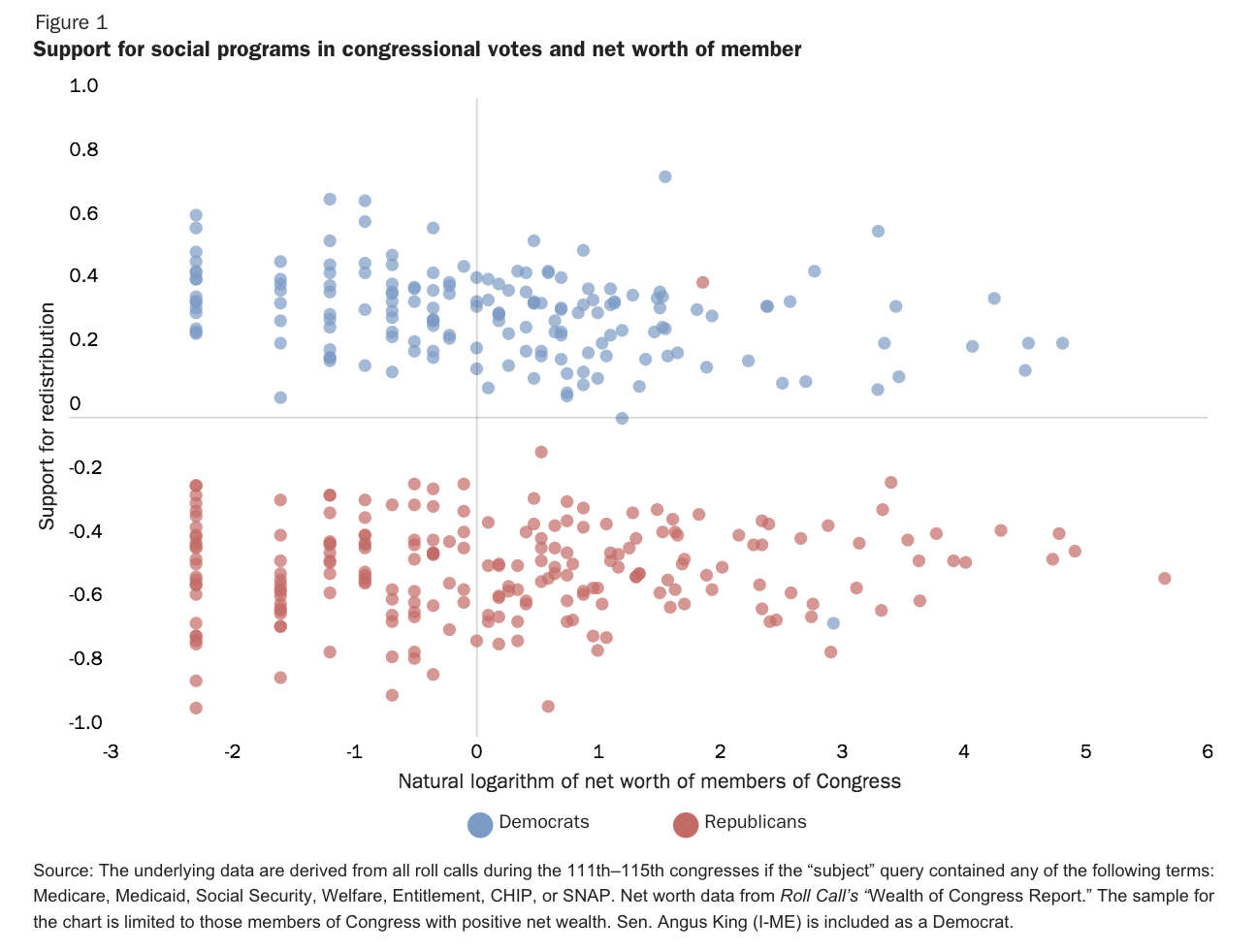 That’s not to say that the very wealthy across America might not, on average, have relatively different views than the rest of us. Evidence here is scarce, but one survey by Benjamin Page, Larry Bartels, and Jason Seawright of 104 wealthy individuals with wealth over $40 million in Chicago did find some differences.

Wealthy individuals, they found, were (on average) more likely to worry about budget deficits and more likely to want to cut Social Security, healthcare, food stamps, and homeland security spending than the rest of the population. They were less likely to support more redistribution, but overall supported income taxation at current rates and backed a progressive Social Security system. On regulation, they favored intervention in areas where scandals had occurred but considered small businesses to be overregulated.

Other surveys by Martin Gilens on the top 10 percent by income (a much broader group) have found that “the income rich” had somewhat stronger opposition to taxes and business regulation than the rest of the population, were less protectionist on trade policy; less conservative on religious and moral issues; and more supportive of foreign aid, top income and capital gains tax cuts, gas tax increases, and restraint in Social Security and Medicare spending.

If the wealthy have captured politics, they are doing a pretty good job of hiding it. Yes, we’ve recently seen the Tax Cuts and Jobs Act, and an effective moratorium on new regulation. But we’ve also seen rampant trade protectionism, a President attempting to cut foreign aid, protection of entitlement spending, conservative justices appointed to the Supreme Court, and the President push for much higher homeland security spending. In recent years, there’s been much discussion over pretty imaginative antitrust action against three of the top 10 richest Americans’ companies: Jeff Bezos’ Amazon, Mark Zuckerberg’s Facebook, and Larry Page’s Google. Some “capture of democracy.”

Progressive economists tend to focus, of course, just on top taxes and social spending as a proxy, implicitly arguing that the absence of a bigger welfare state with more taxes on the rich is evidence itself that the wealthy have captured politics already. Surely, simple strength of numbers shows the majority should have voted for more progressive taxes to fund transfers to the rest of us? 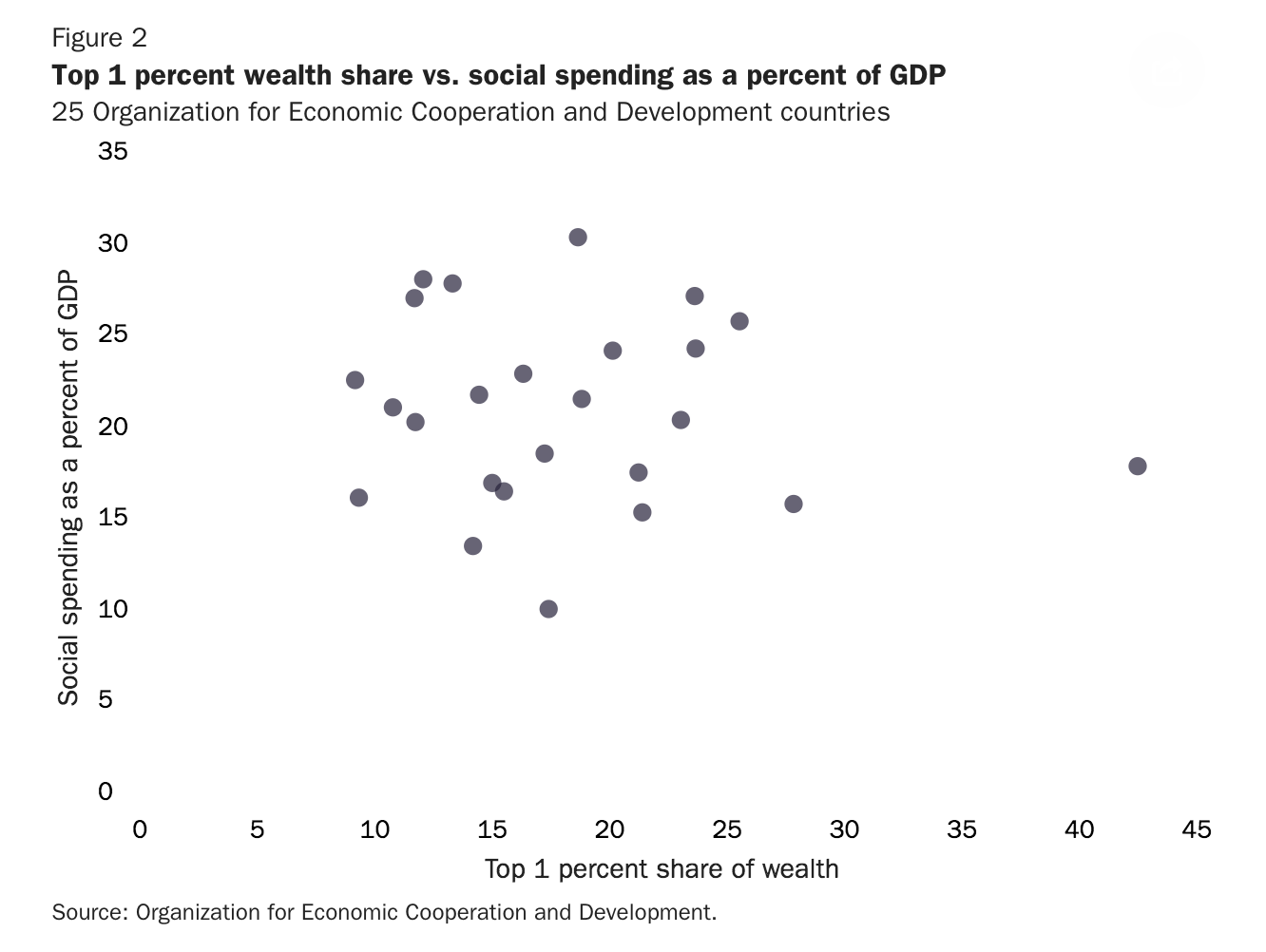 It’s easier for progressives to think that the super wealthy are to blame for their policy preferences not being implemented than to contemplate a more uncomfortable explanation: voters generally do not think inequality a major problem, and to the extent they might, they do not support big government policies to solve it. Two percent or less of the public say “the gap between rich and poor” is the “most important issue” facing the country. Estate taxes are widely loathed, despite how few people pay them. Much evidence suggests the public’s conception of fairness differs strongly from the progressive or socialist worldviews.

At a PIIE conference last week, Larry Summers outlined that he thought it extremely unlikely that growing wealth inequality led to a captured democracy. Yes, the rich tend to be more politically involved than the rest of us. But the cost of access to politicians is relatively low. You don’t need to be super wealthy to get on the top donor table. So the key driver of wealth inequality we have seen – rising top wealth – is unlikely to have changed many political outcomes. Vested interests and cronyism are far more important causes, bringing (as they tend to) paths to obtaining money and, more importantly, votes.

In short, the evidence for wealth inequality leading to democratic capture is extraordinarily thin. A 2019 Cato-YouGov poll found that 62 percent of Americans surveyed do not believe that “billionaires are a threat to democracy.” What hard evidence do Warren and others have to suggest they are wrong?