Non-Nuclear EMP Weapons: How to Deter China's Growing Military Might? 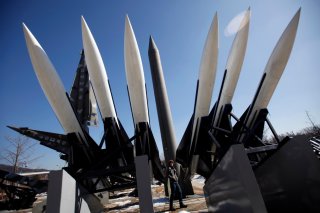 In the event of war with the People’s Republic of China, the United States and its allies will face a larger Chinese force fighting largely on its home turf. It will require the development of weapons systems that can disable multiple targets within a set range. Non-Nuclear Electromagnetic Pulse (NNEMP) weapons could have such a promise when it comes to knocking out Chinese radars, warships, and military installations.

EMPs are generated in nature by lightning or by nuclear weapons. The 1962 Starfish Prime exo-atmospheric nuclear test showed the threat of such EMPs when it disabled streetlights and other electrical devices. Another test in 1993 at Eglin Air Force base of an NNEMP device fried the electronic engine parts and alternators of cars parked hundreds of yards away.

NNEMP weapons could generate an electromagnetic pulse with an effective range of a few hundred yards to a few miles depending on their size. Russia currently has its own NNEMPs under development. Soviet physicist turned dissident Andrei Sakharov first theorized about their potential as a weapon back in the early 1950s. It was not until the 1990s that practical examination of NNEMP weapons began.

NNEMP weapons work by generating an electrical charge that destroys sensitive electronic circuits by releasing microwaves upon contact with the target.

During the Cold War, American war planners envisioned being overwhelmed by Soviet and other Warsaw Pact tanks and armored personnel carriers pouring into West Germany across the Fulda Gap. Weapons like the A-10 Warthog were conceived to shred these divisions along with weapons like the AH-64 Apache.

NATO also had a technological edge during the Cold War. Today, China and Russia are on the verge of technological parity with the United States and its allies, which makes their planes, ships, tanks, missiles, and other military hardware just as vulnerable as our weapons systems are.

“The damage to the electronics will take considerable time to repair and the downtime of the affected combat systems may extend from a few hours to even months,” a report by India’s Manokhar Parrikhar Institute for Defence Studies and Analyses published by the Eurasia Review said. “Unserviceable combat systems and the absence of command and information systems are likely to result in prevalence of disorder and uncertainty, giving the offensive side a considerable advantage to wrest initial gains and turn the situation in its favour.”

War is the promotion of chaos, and it is beholden of your side to promote the most chaos and disruption on your opponent to win. NNEMP weapons could have the effect of blinding the enemy and throwing a monkey wrench into China’s ability to communicate among its units and to detect allied forces.

Degrading the enemy’s Command, Control, Communications, Computers, Intelligence, Surveillance, and Reconnaissance capabilities is the key to victory in modern warfare.

In a potential conflict with China, America and its allies will face superior numbers of ships, missiles, planes, etc. With the advent of alleged Chinese anti-stealth radars that purportedly can detect the F-22, F-35 or B-2, it’s doubly important to have a weapon that can neutralize multiple targets simultaneously from long ranges. An NNEMP weapon could fry the electronics of the radars and nearby surface-to-air missiles.

The United States can’t take the chance that stealth alone will win as it did against fourth-rate Third World armies like those of Iraq, especially if China and Russia have developed radars that can detect stealth jets. NNEMPs could serve as a first-strike weapon to disrupt enemy defenses and allow for conventionally armed bombers, fighters, and cruise missiles to carry out second strikes against enemy targets.

And it behooves the U.S. military to move the development of practical NNEMP weapons to near the top of the list of next-generation wonder weapons. Such weapons could be deployed by platforms like the Long-Range Strike Missile (LRASM), Tomahawk cruise missiles, or from aircraft such as the B-52, B-2, B-21, B-1B, or F-35. Some versions of the LRASM can hit targets from 620 miles away.

Such weapons should also be supplied to allied nations including Australia, Japan, Poland, the Baltic States, and Taiwan as a deterrent against aggression. At the same time, the United States and its allies should work to harden electronics in their military units against reciprocal attacks by enemies like China and Russia that are rumored to also have similar weapons.