Nord Stream 2’s Impact on Ukraine: The View From Kyiv 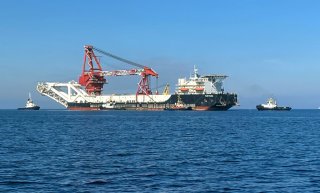 The new Nord Stream 2  pipeline, which is ninety-eight percent complete, should be fully built by the end of August 2021. The majority of the Western world sees the project as a Russian strategic maneuver to expand its influence in Europe by dominating energy supplies and gaining additional leverage over its close neighbors, especially Ukraine. After a few rounds of mild U.S. sanctions on the vessels, entities, and individuals involved, Washington and Berlin reached an agreement on July 21, 2021, that basically allows for the completion of Nord Stream 2. Russia’s state-run gas company Gazprom applauded this move, claiming that Nord Stream 2 grows out of the successful experience in constructing and operating the original Nord Stream gas pipeline.

In a scenario where Russia uses energy as a weapon and/or continues aggressive actions against Ukraine, Germany is obligated to impose sanctions that will limit Russian gas exports to Europe. According to that agreement, Ukraine, as well as Europe, will receive 200 million euros toward security and sustainable energy, and Germany must use all its influence to assure Russian gas will continue to transit through Ukraine through 2034. Many Ukrainian experts and politicians agree that continuing Russian gas transit through Ukraine is a vital safeguard to prevent Russia from taking more aggressive steps against Ukraine. But whether this agreement is enforceable remains in doubt, as Sergey Nechaev, the Russian Ambassador to Berlin, recently said that the U.S.-Germany deal is not legally binding.

Ukraine will suffer when the new gas pipeline becomes operational. If Russia delivers its gas to Europe, bypassing Ukraine, Ukraine will lose two billion dollars in annual transit fees. In turn, cutting off Ukraine from the transit route opens possibilities for Russia to expand its military “initiatives” within Ukrainian territory. Russia seems unlikely to keep its word to continue gas transit after 2024 given Putin’s remark in early June that Ukraine needs to show “goodwill” to keep Russian gas transit.

In order to mitigate these threats, Ukraine should avoid being dependent on any third party and find ways to solve its problems as autonomously and as soon as possible. It is a good sign that Naftogaz is working on organizing the Ukraine Gas Investment Congress (UGIC) scheduled for October 20-22 in Kyiv.

Ukraine has no choice but to take action as quickly as possible. “In addition to the loss of two billion dollars in annual revenue from the transit of Russian gas to the EU, Ukraine is threatened by a significant weakening of its security,” said President of the Institute for Democracy and Development "PolitA" Yekaterina Odarchenko. She is convinced that after stopping gas transit, Moscow will no longer be held back by fears of damaging the Ukrainian trunk pipeline and the military threat to Ukraine will significantly increase.

Given the need for an energy transition away from fossil fuels and considering current worldwide energy consumption projections until 2050, the overall picture for natural gas, the most environmentally clean fossil fuel, looks the same without significant shifts between 2025 and 2050, but renewables consumption is increasing rapidly. In the light of this energy transition and that Ukraine underground gas storage capacity is one of the largest in Europe, the country should focus its efforts on increasing its own natural gas production and developing the capacity to operate on alternative energy resources, which will bring Ukraine closer to Europe, enhancing energy security for itself as well as for its European partners. Additionally, as Ukrainian independent energy expert Valentin Zemlyansky has suggested, Ukrainian leadership should find ways to cooperate with Germany in the use of the Ukrainian gas transmission system (GTS) in hydrogen projects, thereby developing ways to modernize Ukrainian gas pipelines, reduce gas tariffs for the population, and reduce the cost of maintaining gas infrastructure.

Iryna Perezhogina is a Graduate Research Assistant and MA candidate at George Washington University’s Elliott School of International Affairs’s Institute for European, Russian, and Eurasian Studies (IERES). Her research interests include international energy markets with a concentration on former Soviet republics and the Arctic region.