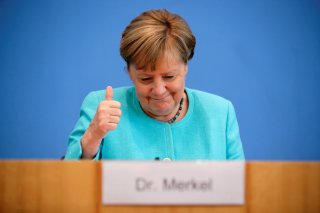 Despite some people’s concerns, the Angela Merkel-Joe Biden deal on Nord Stream II will not put the European Union (EU) in any direct danger. However, this embarrassing deal can potentially worsen Brussels’ standing as a regional power indirectly. It accentuates the EU’s dependency on the United States, both in energy and in foreign policy. Instead, Germany should have led the effort in reaching a compromise with Baltic and Central European states for the sake of a united European decision. This could have signaled solidarity with Europe’s eastern neighbors and an affirmation of the EU’s position to quickly move away from fossil fuels, though many Europeans are now left with a bad aftertaste at the end of the Merkel era. Germany, unfortunately, chose to ignore the concerns of Central and Eastern European countries, and—in a solo effort—fell into old habits of prioritizing the opinion of an American president.

Germany’s decision was embarrassing for several reasons. First, it undermines the EU’s norms and values: despite the annexation of Crimea, the war in Donbas, the ammunition depot explosion in Czechia, the police violence against protestors, the Skripal and Navalny poisonings, the Khangoshvili assassination, the banning of European non-governmental organizations (NGOs) in Russia, the election meddling, and endless support for Belarussian president Alexander Lukashenko, the German government could only express empty threats against Russia while the construction of Nord Stream II continued.

Furthermore, Germany’s decision was embarrassing because it reaffirms Russia’s image of the EU as divided, chaotic, and largely controlled by the United States. Amidst many critical remarks questioning the politics and environmental effects of the project from the Baltic States, Central, and Southeastern European Union members, as well as numerous requests by Ukrainian president Volodymyr Zelensky, Germany paid closer attention to the United States and disregarded its European and EU allies.

Germany and the EU will suffer the repercussions of this shameful deal. Nevertheless, the negative side effects for the European Union of finishing the pipeline are “only” political. Russia has just as much interest in selling its gas as Europeans have in buying it—another gas shortage in winter would only accelerate European divestment from (Russian) fossil fuels. Russia would be, as Vladimir Putin has promised, a reliable partner when it comes to delivering gas to the European Union. Countries like Estonia, Finland, and Bulgaria—all reliant solely on Russian gas—are not at risk of Russia turning off the gas tap. Therefore, the risks for the EU are merely indirect: trust and reputation can erode. Due to the deal, trust in the EU and its democratic and economic ties, and widespread pro-Europeanism in Ukraine, Georgia, Moldova, and many Balkan States are likely to backslide. Globally, in the context of the race against climate change, the EU is damaging its standing also by setting an example in how not to act sustainably. Furthermore, any EU-skeptic actors within the EU and in Russia can point to Germany’s decision as a case study of why cooperating with Brussels undermines national interests.

The only country facing direct danger due to the Merkel-Biden decision is Ukraine. The Russian government is quite openly trying to circumvent what they see as an unreliable and unstable partner—by supporting projects such as Nord Stream II, but also South Stream. In the best-case scenario, Nord Stream II will cause economic hardships to Ukraine; in the worst-case scenario, Russia could use gas (as opposed to money from gas transport) as a weapon of coercion against Kyiv. The German government knows this, but in its eyes, the danger to unfold in Ukraine is only collateral damage that can be dealt with later–after the pipeline is built.

The views shared in this piece reflect only the opinion of the author and not of IFAIR e.V.

Lance Bradley is the Regional Co-Director for Eastern Europe to Central Asia for the Young Initiative on Foreign Affairs and International Relations (IFAIR).