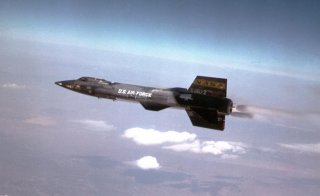 The fastest plane ever to fly is the Lockheed SR-71 Blackbird. The world’s official airspeed record was set by an SR-71 crew on July 28, 1976, clocking in at an incredible 2,193 miles per hour. As astonishingly fast as that is—a plane flying constantly at that rate could travel from San Francisco to Washington, DC in roughly an hour and fifteen minutes—the SR-71 itself could, and probably did, exceed it on other occasions, although those instances will remain classified for some time, given the nature of the Blackbird’s missions.

However, the legitimacy of the Blackbird’s claim to be the fastest plane depends somewhat on what is considered a “plane.” The U.S. Air Force has piloted other craft at much higher rates, although these increasingly resembled rockets rather than jet aircraft intended to maneuver in the air.

A case in point is the North American Aviation X-15, which holds the record for the fastest thing ever flown. On October 3, 1967, test pilot William Knight, flying over Edwards Air Force Base in California, clocked in at 4,520 miles per hour, or Mach 6.7. Four months later, on a similar test flight, Knight’s flight nearly ended in disaster after the plane’s electrical system cut out; in spite of this major handicap, he successfully landed the aircraft without incident, earning him a Distinguished Flying Cross.

In all, three X-15s were built during the late 1950s; the first flight took place in June 1959. Although they could travel far faster than any previously existing aircraft, their purpose was not strictly military in nature, but research-oriented, attempting to gather data from hypersonic flights and—crucially—learn how to land a craft with rocket engines as one would land a conventional airplane.

The data gained from X-15 flights would soon be vital; after the Soviet Union’s successful launch of the “Sputnik” satellite in 1957, the Space Race had begun, and both Washington and Moscow sought to send a crew of astronauts into space. The Soviet Union would ultimately achieve this first, with the orbit of cosmonaut Yuri Gagarin in 1961; however, the United States ultimately “won” with the 1969 moon landing, and the data gathered from the X-15 flights would later be used in the development of other space shuttles.