The North Korea Dilemma: What Does Trump Do Now? 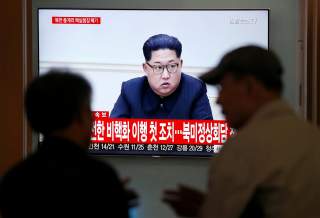 Is Donald Trump’s deal with Kim Jong-un towards ‘denuclearization of the Korean Peninsula’ falling off the tracks already? US Secretary of State Mike Pompeo’s visit to Pyongyang over the weekend certainly suggests that’s the likely outcome.

Pompeo had hoped to get some assurances from the Kim regime on its approach to achieving North Korea’s comprehensive, verifiable and irreversible denuclearisation (CVID). Getting a clear understanding of North Korea’s intentions on this important issue was seen by the US as an essential prerequisite for continued diplomatic engagement. This information was completely lacking in the superficial Singapore summit declaration, presented on 12 June.

But Pompeo came away empty-handed from Pyongyang. Media reporting of the meeting suggests that the North Koreans didn’t explain what steps would be taken to eliminate their nuclear and missile capabilities, nor was there an accounting of their warheads, missile systems and weapons labs. Rather than a helpful statement from Pyongyang that laid the groundwork for further talks, the North Korean government publicly denounced Pompeo’s team as making ‘gangster-like demands’ and called the talks ‘regrettable’.

Most commentary sees this as a major setback for the denuclearisation process and a humiliation for Trump.

Pyongyang’s statement does clarify two points. First, North Korea won’t accept CVID as a basis for any deal. Second, any diplomatic process must involve a peace settlement to defuse tensions. But what does that really mean? It’s likely that, as part of any process, the North Koreans will demand an easing of sanctions and a drawdown of US military forces on the Korean peninsula. The withdrawal of US forces in South Korea is an idea that appeals to Trump despite the risks to South Korea, and the perception that it could generate that Washington was wavering on its security commitments to key allies.

Security assurances from the US to the North Korean regime would be expected to follow. If the North Koreans are pushing ‘the denuclearization of the Korean Peninsula’ formula, rather than accepting CVID, they could demand the end of extended nuclear deterrence security guarantees to South Korea. That would have to involve withdrawal of nuclear-capable forces from within and around the Korean peninsula, potentially including Japan.

The statement from Pyongyang doesn’t say that denuclearisation will be the end result of any step-by-step process (that could take years).

As Max Boot suggests: ‘Kim has played Trump like a Stradivarius.’ Trump heaped praise on the world’s most brutal dictator in Singapore, and then boasted in a tweet that North Korea had promised to unilaterally disarm and therefore ‘there is no longer a nuclear threat from North Korea’. At the same time, Pyongyang was reportedly busy modernisingits nuclear weapons labs in undeclared facilities to increase production of fissile material, while expanding its missile development capabilities. It’s also working on a new submarine designed to launch ballistic missiles with nuclear warheads.

Washington now has some basic choices to make. One option is to continue diplomatic negotiations with the Pyongyang. That risks perpetuating an illusion of progress based on a hope that the North Koreans are sincere about getting rid of nuclear weapons. Clearly Trump is content to rely on hope. But hope isn’t a strategy, and the US and its allies have been burned badly in the past. Nor is it likely that North Korean demands for concessions will be accepted by Trump’s national security team—James Mattis, John Bolton and Pompeo—who are cognisant of how the North Koreans behave. They are likely to resist surrendering too much, too quickly, to Pyongyang.

Certainly, Trump can continue to move the goalposts via Twitter, to claim success when there’s only continued North Korean duplicity. But all this means is that Kim will continue to play Trump for a sucker. Only the most optimistic view would suggest that this approach will really lead to North Korea eliminating its nuclear weapons and missile capabilities.

Another option is to try to reinstate ‘maximum pressure’. There are risks here, too. A worsening US–China trade war might make China less likely to enforce any new economic sanctions against North Korea. Moscow and Seoul may also be reticent, with the latter seeking to avoid new tensions with its northern neighbour. Trump could certainly revert to ‘fire and fury’ threats, and reinstate the Ulchi Freedom Guardian exercises he foolishly cancelled without the North Koreans reciprocating (their military exercises continue). Returning to that confrontational posture would resume the slide back towards a devastating military conflict on the Korean peninsula.

The US could also visibly and meaningfully strengthen its nuclear-capable forces deployed in the region, and reinforce security guarantees in a way that sends a strong message to Pyongyang. Such a deployment could be reinforced by trilateral (US–South Korea–Japan) cooperation on ballistic missile defence, and on developing greater intelligence, surveillance and reconnaissance capability to detect and track North Korean ballistic missile forces. Certainly greater effort towards responsive non-nuclear precision-strike capabilities would also help.

This is a threat, but one that reinforces strategic ambiguity from Kim’s perspective. It represents a more calibrated and nuanced approach that could be matched with inducements for a return to diplomacy once the North Koreans are ready to seriously engage on the basis of CVID.

It’s likely to be a better option than an ongoing diplomatic process without a clear commitment by Pyongyang to CVID on an agreed timetable. The art of that bad deal would steadily erode US credibility. After the failed Pompeo visit to Pyongyang, the US should begin to consider alternative approaches, even if Trump is forced to back-pedal on his ‘peace in our time’ tweets.