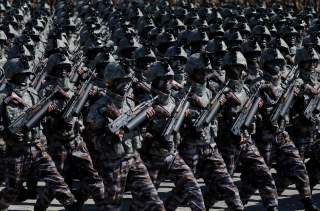 In a conversation with former Deputy Secretary of Defense Cyrus Vance, acting as a White House envoy, Park shared his suspicions. “Now the pattern is changing,” he said, according to a summary of the talks. “[The North Koreans] are setting the stage for open aggression against South Korea.” But U.S. officials didn’t see it that way. In reports over the weeks following the incidents, the CIA averred that the Blue House raid was “probably the beginning of a stepped-up Communist terrorist campaign” but that “nothing the North Koreans have done suggests they are about to embark on large-scale hostilities.”

As South Korean police searched for a team of North Korean guerillas, the soldiers from the 124th entered Seoul, dropped their coveralls, leaving them dressed in South Korean military uniforms for the final leg of their mission. As the soldiers approached within 800 meters of the presidential residence, a policemen challenged them. When their cover story fell apart, they opened fire — and all Hell broke loose.