North Korea Nightmare: 1 Picture That Terrifies the Army and Marines 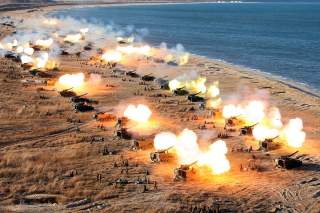 Additionally, North Korea has reinforced its artillery forces with 122mm towed MLRS systems in the coastal area near the West Sea coast and near the frontlines. The North Korean artillery pieces would be protected by covered trenches to enhance their survivability during combat operations. Altogether, the South Korea estimates that the North has some 8,600 pieces of tube artillery and 5,500 MLRS batteries available to its forces.Meanwhile, North Korea is also modernizing its armored forces—but the mechanized troops are not the main focus of the regime in Pyongyang. “Equipment modernization is also constantly pursued, such as replacing the existing T-54 and T-55, the main tanks of the armored and mechanized units, with the Chonma-ho and Songun-ho tanks,” the white paper reads. The DPRK has more than 4,300 tanks and 2,500 other armored vehicles at its disposal according to South Korea.