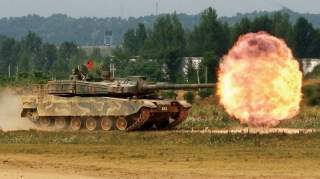 Key point: Seoul's K2 is a formidable tank that is built for Korea's terrain.