North Korea Is Still Building Nuclear Missile Submarines—but Are They Any Good? 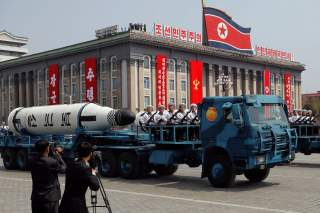 It is not clear how the North Koreans intend to use their ballistic-missile submarines. Typically, SSBs offer the most secure kind of second-strike deterrent, as subs on patrol are more difficult to target than stationary missile installations or airfields. However, these boats lack nuclear reactors necessary to long-term, long-range patrols, and also lack many of the modern features that allow conventional submarines to escape scrutiny from their larger, more capable nuclear cousins.

What is the status of North Korea’s submarine-launched ballistic missile (SLBM) program? SLBMs are the classic second-strike insurance program; even if the homeland is incinerated, submarines hiding in the deep can retaliate against a nuclear attack. North Korea, a state of limited means with a limited nuclear arsenal, could use SLBMs to deter a preventative U.S. attack. Conversely, North Korea’s missile submarines could offer the opportunity for a preemptive attack against Japan or the United States.

For the last three years, North Korea has been conducting progressively more rigorous testing of a missile that Western analysts describe as the KN-11. Estimates of the range of the KN-11 go as high as 2,500 kilometers, although the tested variants have thus far only reached five hundred kilometers. While early variants were liquid fueled, the most recent versions of the missile appear to use solid propellant. Some analysts have alleged a substantial similarity to Chinese missiles of the same type, although collusion remains unsubstantiated.

Reports indicate that most of the tests thus far have been from submersible barges. A test from an operational submarine successful ejected the missile, which then exploded on ignition, possibly damaging the submarine. Nevertheless, the tests have demonstrated significant progress, and it seems likely that the North Koreans will be able to resolve the remaining technical problems sufficiently to provide a somewhat reliable missile. The deployment of such a missile, even of only limited reliability, would complicate South Korean and American missile defense efforts, as well as give the North Koreans greater reach with their nuclear weapons.

What about the platform for the missile? Building and operating a conventional ballistic missile submarine (SSB) was well within the means of the Soviet Union in 1960; it is within the means of North Korea today. In the 1950s, the USSR converted a group of its conventional, two-thousand-ton Zulu-class submarines into ballistic-missile submarines. Shortly thereafter, the USSR constructed the somewhat larger Golf-class subs, purpose-built to carry three ballistic missiles. Several of the Golf boats made their way to North Korea in the 1990s for scrapping, a process which may have helped the North Koreans develop their own boat. Despite claims suggesting that the DPRK might have refurbished one of the old Soviet subs, no hard evidence has emerged of such a project.

Rather, it appears that the North Koreans have built a new boat. The Sinpo (or Gorae) is estimated to be a roughly 1,600-ton diesel-electric boat, capable of launching a single ballistic missile from a silo in its sail. Given Soviet experience with similar technology, it is likely that the submarine must approach the surface in order to launch, perhaps from depths of ten to fifteen meters. Speed and range are uncertain, although probably in line with boats of similar size and construction; we can guess around twenty knots, with a 750-mile radius of action. The first Sinpo boat, which has served as a test bed for the KN-11 and which has deployed to sea, may simply be a prototype for larger submarines to come.

Of course, unreliability remains a key problem for both North Korean submarines and missiles. Missile accidents at sea can lead to the destruction of a submarine; the Soviets lost or nearly lost several ballistic-missile boats during the Cold War, and rumors persist that China lost one of its early boats. The Korean People’s Navy would likely struggle to operate any SSBs at the distance, depth and time frame normally associated with deterrent patrols.

It is not clear how the North Koreans intend to use their ballistic-missile submarines. Typically, SSBs offer the most secure kind of second-strike deterrent, as subs on patrol are more difficult to target than stationary missile installations or airfields. However, these boats lack nuclear reactors necessary to long-term, long-range patrols, and also lack many of the modern features that allow conventional submarines to escape scrutiny from their larger, more capable nuclear cousins. Indeed, the ability of the Sinpo-class submarines to escape port without surveillance from U.S., Japanese and South Korean antisubmarine assets is in deep question. And even after it escapes, the ROKN, JMSDF and USN have extensive surface, subsurface and air assets to track and target the submarine while on patrol.

Moreover, North Korea lacks the basic requirements to carry out a bastion strategy, which needs extensive antiair, antisubmarine and antimissile defenses. The extant naval forces of the DPRK would suffer quick destruction during an American attack, and North Korean A2/AD systems would not long be able to provide a bubble for the SSBs to operate.

Finally, any SSBs would likely be targeted in any preemptive or preventive U.S. attack against North Korean missile facilities. Given the high value of the targets, the attacks would likely overwhelm any port defenses, and destroy the submarines before they could launch their payloads. Even an effort to protect the submarine through hard defenses (a cave, for example) would starkly limit the cruising time available to the boat for launching its missiles.

However, under peacetime conditions the KPN could deploy SSBs, even under U.S. and Japanese scrutiny. Despite their extreme vulnerability, it is unlikely that U.S. or Japanese forces would attack the submarines simply for leaving North Korean waters.

• Submarines of the size necessary to launch SLBMs are well within the capabilities of the North Korean navy.

• These submarines do not constitute a true second-strike deterrent, as they are extremely vulnerable to either ASW (at sea) or missile strikes (in port).

• These submarines could potentially constitute a first strike force against targets that North Korea cannot otherwise easily reach, although their deployment would significantly ratchet up tensions.

North Korea’s SSBs certainly complicate the job facing American, South Korean and Japanese planners, but they do not provide a practical second-strike capability.