North Korean Stability is in the Eye of the Beholder 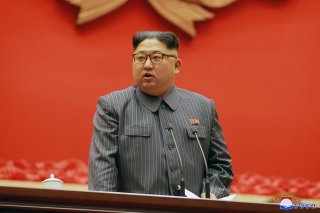 Stability, like beauty, may lie mainly in the eye of the beholder.

Consider the following three propositions: North Korea is as solid as a rock; North Korea is on the brink of collapse; there are too many unknowns to be able to forecast North Korea’s future.

North Korea is as solid as a rock. If you think the DPRK, the Korean Workers’ Party-led government, and the Kim regime are durable, there is ample evidence to support that case. All three have survived the Korean War, the Vietnam War, the Cold War, and, thus far, the global pandemic. Indeed, based on coronavirus deaths and recent political upheavals alone, you could argue North Korea appears to be more stable than the United States.

North Korea is fundamentally unstable and on the brink of collapse. If you worry that North Korea—especially Kim Jong-un and thus perhaps also the regime—are at significant risk, there is certainly plenty of things about which to worry. Chairman Kim’s recent remarks suggest he may have his doubts about the challenges facing North Korea. The DPRK remains vulnerable to virulent new strains of the coronavirus. And the failure to pick up talks with the United States or improve inter-Korean relations suggests Pyongyang is likely to continue to be better at building missiles and nuclear weapons than its GDP.

Notwithstanding the preceding arguments, forecasting North Korea’s future is a futile business. All regimes end. North Korea’s dynastic dictatorship has defied odds by surviving as long as it has. But its good fortune—if that’s the phrase—may well run out. But I wouldn’t count on it running out this year.

Thus, North Korea’s future is likely to continue to defy simple quantification and forecasting. Consequently, policymakers have no alternative but to deal with the North Korea we have rather than thinking we can wish it away or completely ignore it. Let’s persist with attempts at diplomacy, even while we can only offer modest steps forward in exchange for reciprocal measures. And let us preserve strong defense and a capable alliance network to deter conflict and be in the best possible position to de-escalate a crisis should it occur.

For all the troubles North Korea causes the world, and for all the horrors the regime inflicts on many of its people, the sudden failure of North Korea could be even worse than its continued existence.